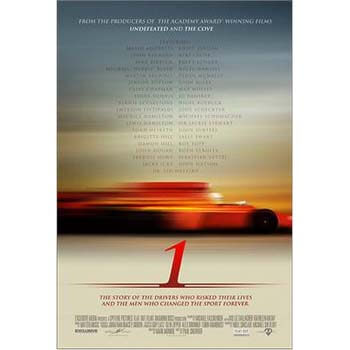 1 (also known as 1: Life On The Limit) is a 2013 documentary film directed by Paul Crowder and narrated by Michael Fassbender. The film traces the history of Formula One auto racing from its early years, in which some seasons had multiple fatalities, to the 1994 death of Ayrton Senna, the sport's most recent death at the time of production. Extensive and often rare archival footage is used throughout.

The film opens with the 1996 Australian Grand Prix in Melbourne, where Martin Brundle survived a spectacular crash at turn 3. After receiving clearance from race doctor Sid Watkins, Brundle hopped into a spare car to finish the race. The film then takes a brief look at the early days of Formula One racing in the 1950s, which was essentially a resumption of prewar Grand Prix racing. In 1958, the year world champion Juan Manuel Fangio retired, the FIA announced the Formula One World Constructors' Championship for the makers of the winning car. This led to a wave of British privateer teams, nicknamed "Garagistas" by Enzo Ferrari, dominating the Championship. Most notable was Team Lotus, led by Colin Chapman.

In 1966, the FIA doubled the engine size from 1.5 to 3 liters, which saw the cars race markedly faster on tracks and facilities unchanged since before World War II. This resulted in several fatal accidents. The death of Chapman's star driver Jim Clark at the Hockenheimring in a Formula Two race in 1968 was a turning point: several drivers, including Clark's Lotus replacement, Jochen Rindt, and the Grand Prix Drivers' Association (GPDA), began questioning the sport's safety. Rindt himself was killed during practice at the 1970 Italian Grand Prix; he was posthumously awarded the driver's championship that year.

Jackie Stewart, three-time champion and Chairman of the GPDA, used his position to push for improved safety and track facilities, including safety barriers and mandatory seat belts. This caused some opposition with other drivers, most notably Jacky Ickx, Stewart's opponent on the track at the time. Stewart's influence led to boycotts of some races, including the 1971 Belgian Grand Prix. Despite his efforts, drivers continued to be killed, including Stewart's own teammate, François Cevert, at the 1973 United States Grand Prix.

Meanwhile, new drivers and teams made their way into Formula One. Hesketh Racing, led by the extravagant Lord Hesketh, entered Formula One in 1973 with their Formula Two driver James Hunt. Despite their rather blasé appearance, they performed surprisingly well including winning the 1975 Dutch Grand Prix ahead of Ferrari's Niki Lauda. When Hesketh was forced to close at the end of 1975, Hunt went to McLaren, which placed both him and Lauda as favorites to win the 1976 Championship.

In 1978, Bernie Ecclestone, head of the Formula One Constructors Association, hired Professor Sid Watkins as the official Formula One 'race doctor.' Initially distrusted by track officials, Watkins' influence on the sport increased after the death of Ronnie Peterson at the 1978 Italian Grand Prix; at that race, the Italian officials prevented him from treating Peterson at the scene.

In the aftermath, the FIA President Max Mosley (who drove in the race Jim Clark was killed in, and was head of March Engineering in the 1970s), formed the Advisory Expert Group chaired by Sid Watkins to research and improve safety in motor racing. As a result of the changes implemented by this Group, Formula One did not experience a driver fatality until 2015, when driver Jules Bianchi succumbed to a head injury 9 months after a crash during the 2014 Japanese Grand Prix.