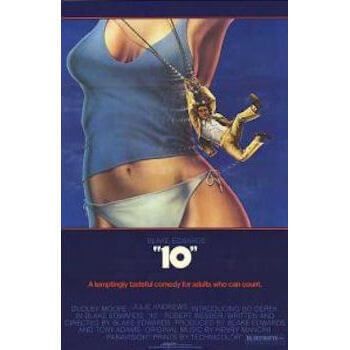 10 is a 1979 American romantic comedy film written, produced, and directed by Blake Edwards, and starring Dudley Moore, Julie Andrews, Robert Webber, and Bo Derek in her first major film appearance. It was considered a trend-setting film at the time and was one of the year's biggest box-office hits. It follows a man in middle age who becomes infatuated with a young woman whom he has never met, leading to a comic chase and an encounter in Mexico.

During a surprise 42nd birthday party for wealthy, well-known composer George Webber, thrown by his actress girlfriend Samantha Taylor, he finds he is coping badly with incipient middle age. From his car, George glimpses a bride-to-be and is instantly obsessed with her beauty, which he rates as "11" on a scale that goes up to 10. Following her to the church, he crashes into a police cruiser, is stung by a bee, and nearly disrupts the wedding ceremony.

The following day, George spies on his neighbor again, hits himself with the telescope, and falls down an embankment, causing him to miss Sam's phone call. Still obsessed with the young bride, George schedules a dental appointment with Jenny's father and learns that Jenny and her husband have gone to Mexico for their honeymoon. The examination reveals a mouthful of cavities, requiring fillings. The after-effects of the novocaine, aggravated by his heavy drinking, leave George completely incoherent. Sam finally reaches him on the phone, but mistakes him for an intruder and calls the police, who hold George at gunpoint while trying to understand his gibberish. Unnerved by the day's events, George visits his neighbor's house to take part in an orgy. Sam arrives at George's and spots him through his telescope, widening the rift between them.

While his songwriting partner Hugh consoles Sam and says she will need to decide how long to wait for George to grow up, George impulsively boards a plane and follows the newlyweds to their exclusive resort in Manzanillo, Colima, Mexico. In the bar, George becomes acquainted with a friendly bartender, plays the piano, and encounters an old acquaintance, Mary Lewis, who suffers from a lack of self-confidence because she blames herself for a series of failed relationships. When they attempt a fling, Mary interprets George's inadequacy in bed as confirmation of her own insecurities.

At the beach, George sees Jenny―wearing a swimsuit with her hair braided in cornrows―and is awestruck again by her beauty. He notices that David, her husband, has fallen asleep on his surfboard. George learns that beyond a certain point are powerful currents that can sweep a swimmer or surfer dangerously far from land. He rents a catamaran, clumsily but successfully rescues David, and becomes a hero. Sam sees him on a TV newscast and tries to contact him, but George (unaware that it is Sam) refuses the call. David, badly sunburned, is hospitalized, allowing Jenny and George to spend time alone together. After dinner, in her room, Jenny smokes marijuana and then seduces George to the sounds of Maurice Ravel's Boléro.

Although George is initially elated to find all of his fantasies being fulfilled, he is horrified when Jenny takes a call from her husband while in bed with him and casually informs him of George's presence. He is even more confused when David responds with a complete lack of concern (he had called to thank George for saving his life). When Jenny explains their open relationship and mutual honesty, and that they only got married due to pressure from her conservative father, George is appalled; realizing that in contrast to the complete infatuation he has had with her, Jenny sees him as nothing more than a "casual lay", so George loses interest.