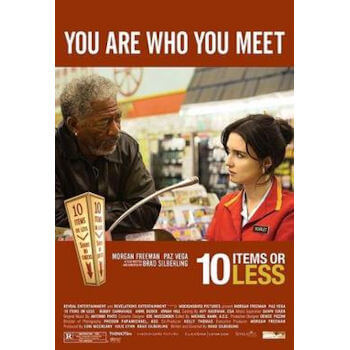 10 Items or Less is a 2006 American comedy-drama film written and directed by Brad Silberling and starring Morgan Freeman and Paz Vega. Shot in fifteen days, 10 Items or Less made its release as a digital download – the first such release via the Internet – while it was still in theaters.

ClickStar, founded by Morgan Freeman and Lori McCreary, made the film available digitally on December 15, 2006, fourteen days after it made its theatrical debut. This event was highlighted by the American Film Institute in their AFI Awards 2006 "Moments of Significance".

Through circumstance, two strangers, an actor (Freeman) preparing for an upcoming role and a cashier (Vega), drive around Los Angeles together, having a number of conversations about life and exploring the differences and similarities between their worlds.