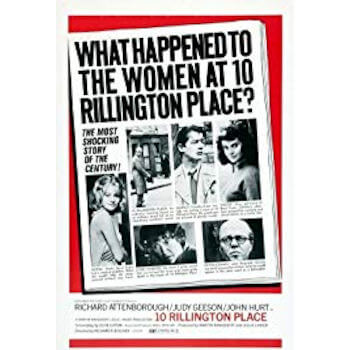 10 Rillington Place is a 1971 British crime drama film directed by Richard Fleischer and starring Richard Attenborough, John Hurt and Judy Geeson. It was adapted by Clive Exton from the book Ten Rillington Place by Ludovic Kennedy (who also acted as technical advisor to the production).

The film dramatises the case of British serial killer John Christie, who committed many of his crimes in the titular London terraced house, and the miscarriage of justice involving his neighbour Timothy Evans. Hurt received a BAFTA Award nomination for Best Supporting Actor for his portrayal of Evans.

The film begins in 1944 with John Christie murdering an acquaintance called Muriel Eady; he lures her to his flat in 10 Rillington Place by promising to cure her bronchitis with a "special mixture", then incapacitates her with Town Gas, strangles her with a piece of rope, and has (implied) sex with her corpse. He buries her in his flat block's communal garden, where a dog uncovers one of his previous victims.

In 1949, Tim and Beryl Evans move into 10 Rillington Place, west London, with their infant daughter Geraldine. Beryl is pregnant again and attempts an abortion by taking some pills. When she informs Tim, they have a violent argument, which Christie breaks up. Soon after, Christie offers to help Beryl terminate the pregnancy. He pretends to read a medical textbook one day in an effort to convince Tim of his expertise. Tim is essentially illiterate and cannot tell that Christie is lying. The Evanses agree to let Christie perform the procedure.

Christie occupies his wife, Ethel, by sending her to his place of work with some paperwork. He grabs his killing tools, makes a cup of tea, and heads upstairs to Beryl. He is interrupted by a couple of builders who arrive to renovate the outbuilding. He lets them in, and when he sees they are well-occupied, he pours a new cup of tea and heads back upstairs. Beryl has a violent reaction to the gas, and Christie punches her in the face to knock her out. He then strangles and sexually assaults her.

When Tim returns, Christie tells him that Beryl died of complications from the procedure. Tim wants to go to the police, but Christie convinces him that he will be seen as an accessory before the fact. Christie suggests that Tim leave town that night, while Christie disposes of Beryl's body. He promises that he will place the baby in the care of a childless couple from East Acton. Tim reluctantly agrees, and leaves the house in the middle of the night. Christie then strangles Geraldine with a tie.

Tim hides out with his aunt and uncle in Merthyr Tydfil, pretending that he is in town on business. He claims that Beryl and the baby are visiting her family in Brighton. Tim's relatives send a letter to Beryl's father, who sends a telegram in response to say that he has not seen Beryl in months. When confronted by his relatives, Tim pretends Beryl had run away with a rich man and then visits the local police station. He confesses to disposing of Beryl's body in the sewer after the botched abortion. Three London police officers lift the manhole, but do not find Beryl's body. A search of 10 Rillington Place eventually uncovers the bodies of Beryl and the baby in the washroom, where Christie hid them.

When Tim is brought back to London, he is charged with the murders of his wife and daughter. In shock, and despondent over the news, he confesses to both crimes, though he is guilty of neither. During his trial, Christie is a key witness. Tim's defence shreds Christie's credibility by revealing that he has a history of theft and violence. Nevertheless, Tim is found guilty and hanged.

Two years after the trial, Ethel begins to fear her husband, and informs Christie she will move out to stay with relatives. When he begs her not to leave him, Ethel implies that he should be in prison. Christie murders her that night and hides her body under the floorboards in their front room. Later, he meets a woman suffering from a migraine in a café. He pretends to be an ex-doctor and promises her a cure. He is next seen putting fresh wallpaper on a wall in his kitchen; it is implied that he has hidden the woman's body in the space behind the wall.

In 1953, Christie is living in a dosshouse. Meanwhile, new tenants are moving into the Christies’ flat. They complain about the awful smell and one of them peels off the wallpaper to find a space behind the wall, where he finds three of Christie's victims. Soon afterwards, Christie is noticed by a police officer in Putney and arrested. The film ends with an intertitle explaining that Christie was hanged and Tim was posthumously pardoned and re-interred in consecrated ground.