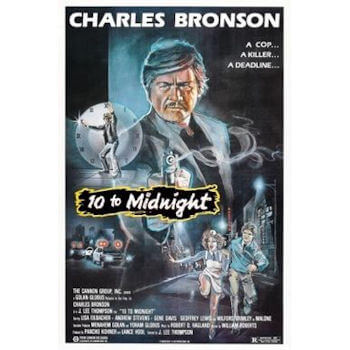 10 to Midnight is a 1983 American crime-horror-thriller film directed by J. Lee Thompson from a screenplay originally written by William Roberts. The film stars Charles Bronson in the lead role with a supporting cast that includes Lisa Eilbacher, Andrew Stevens, Gene Davis, Geoffrey Lewis, and Wilford Brimley. 10 to Midnight was released by City Films, a subsidiary of Cannon Films, to American cinemas on March 11, 1983.

Warren Stacy (Gene Davis) is a young office equipment repairman who kills women after they reject his sexual advances. His attempts at flirting are always seen as "creepy" by women, resulting in frequent rejections. His first victim is Betty (June Gilbert), an office worker of his acquaintance. He tracks her down to a wooded area, and observes her having sex with her boyfriend. He ambushes the couple, kills the boyfriend, and then gives chase to the naked woman. He stabs her to death.

Two Los Angeles police detectives, Leo Kessler (Charles Bronson) and Paul McAnn (Andrew Stevens), investigate his murders. Kessler is a seasoned veteran of the force, while McCann is considerably younger. Stacy avoids prosecution by constructing sound alibis and assaulting his victims while naked except for a pair of latex gloves to hide fingerprints, thus minimizing evidence.

Laurie Kessler (Lisa Eilbacher) is the only daughter of Leo and an acquaintance to some of the victims. A student nurse herself, she becomes a target for the killer. McAnn refuses to go along when Kessler plants evidence in order to frame the suspect. Stacy goes on another rampage, killing three nursing students who are friends with Kessler's daughter.

He is eventually caught, stark naked in the street. Stacy boasts how he will say all the things that will "prove" that he is crazy: he hears voices ordering him to do things, etc., so that one day, he will be back on the street and Kessler, as well as the "whole fucking world," will hear from him again. Kessler replies, "No, we won't." He then shoots Stacy once in the forehead, executing him and leaving all other considerations aside. Kessler stands over the body, surrounded by police.