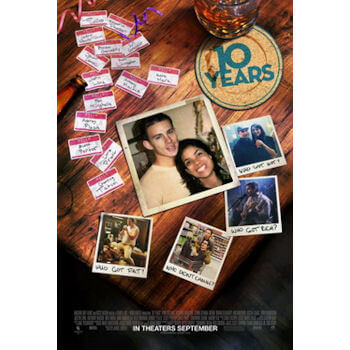 Jake (Channing Tatum), and his girlfriend Jess (Jenna Dewan) arrive at his high school friend's house owned by married couple, Cully (Chris Pratt) and Sam (Ari Graynor). There, some of Jake's friends start to arrive including: best buddies Marty (Justin Long) and AJ (Max Minghella), musician Reeves (Oscar Isaac) and Scott (Scott Porter) together with his wife, Suki (Eiko Nijo). The guys then start driving to their high school reunion venue. Other friends from their high school arrive including: Garrity (Brian Geraghty) along with his wife Olivia (Aubrey Plaza) and Garrity's best friend Andre (Anthony Mackie). Meanwhile, a reclusive woman named Elise (Kate Mara) arrives at the reunion alone. She tries to welcome the guest only to be ignored by the party planners, Anna (Lynn Collins) and Julie (Kelly Noonan).

The night proceeds as each couple is faced with both their past selves and present. Some have changed while others stayed the same; Cully attempts to apologize for his high school behavior towards the nerds he used to know but he only reverts to his old self with each drink he takes, embarrassing his wife and all others present.

Marty and AJ, now successful in their respective careers, attempt to impress and woo the prom queen Anna, the girl who has everything. After she turns them down they attempt childish revenge only to learn that none of them has a perfect life. Instead all three must learn to reconnect and forgive themselves for past faults.

Elise connects with Reeves throughout the night, revealing feelings he has had for her that ended up as inspiration for his popular song 'Never Had', and she must decide if she is going to run away again.

Jake, meanwhile, has been deciding the right time to propose to Jess, but he must come to terms with feelings he had for his high school sweetheart, Mary (Rosario Dawson), and the way their relationship ended.

The film ends with Jake and Jess at a diner with friends, happy to relive past moments and looking forward to tomorrow.