A Victim of the Mormons 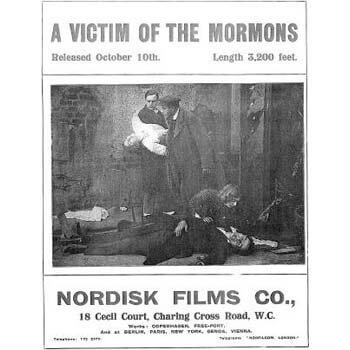 A Victim of the Mormons (Danish: Mormonens Offer) is a 1911 Danish silent thriller film directed by August Blom. The film was controversial for demonizing the Mormon religion, and its box-office success is cited for initiating a decade of anti-Mormon propaganda films in America. It tells the story of an attractive young woman who is seduced and kidnapped by a Mormon missionary, then forced to accompany him to Utah to become one of his wives. The film became a hit, partly due to the popularity of its star, Valdemar Psilander, and partly due to the publicity arising from objections by The Church of Jesus Christ of Latter-day Saints (LDS Church) and its failed campaign to ban the film.

Florence Grange (Clara Pontoppidan), a pretty young Danish woman, is vacationing with her father, her brother, George, and her fiancé, Leslie, at a luxurious seaside hotel in Denmark. One evening, while they are sitting in the restaurant, George introduces them to a young American named Andrew Larson (Valdemar Psilander). Andrew, who is a Mormon priest, is quickly attracted to Florence and gives her an "admission card" to a Mormon meeting. Although Florence cares greatly for Leslie (Carlo Wieth), he often neglects her while pursuing other interests. Florence spends much time with the strangely fascinating American, enabling Andrew to indoctrinate her and convince her to go to Utah with him. Partly in passion and partly in a hypnotic trance, Florence runs away and meets Andrew at the railway station.

After Florence's disappearance, her father searches her room and finds the note from Andrew asking her to come to the train. Leslie and George (Henry Seemann) inform the police of Florence's disappearance and the police notify the harbor patrol. With help from a Mormon friend, Andrew drugs Florence, then exchanges her hat and coat with another couple, enabling Andrew to sneak Florence aboard a steam ship heading for America. The harbor patrol detains the couple wearing Florence's clothes. When George and Leslie arrive to get Florence, the ruse is revealed, but the ship has already sailed. While on board, Florence has a change of heart and wants to return home. Andrew assures her that they will return home. A telegraph is sent to the ship about the kidnapping, but Andrew overpowers the telegraph operator before his plot can be revealed. The ship arrives in America and Andrew escapes with Florence to Salt Lake City where he locks her in a bedroom. George and Leslie leave aboard the next ship for America.

Florence gains the sympathy of Andrew's first wife (Emilie Sannom), but an attempt to set Florence free is unsuccessful when Andrew discovers it. One day, Andrew leaves home to perform a baptism at a Mormon temple. George and Leslie, having arrived in Salt Lake City, follow Andrew to his house. Andrew convinces them that Florence is elsewhere in the city. While the two race off on a wild goose chase, Andrew conceals Florence in a dark, dank cellar with a secret trapdoor entrance. Realizing that they were tricked, Leslie and George burst back into Andrew's house and search desperately for Florence, but cannot find her. Andrew continues to plead his innocence. By luck, Florence discovers the hidden button which opens the secret trap door to her cell. Leslie frees her and promises he will never again neglect her. Andrew pulls a pistol and tries to kill Florence. Leslie prevents him and during the ensuing struggle Andrew shoots himself and dies.