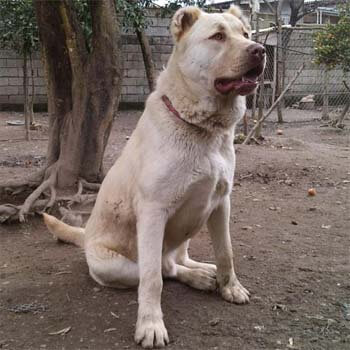 The Kuchi or Afghan Shepherd is an Afghan livestock guardian dog, taking its name from the Kuchi people of Afghanistan. It is a working dog following the nomads, protecting caravans and flocks of sheep, goats, camels and other livestock from wolves, big cats and thieves. It is sometimes known as just a local variant of the Central Asian Shepherd Dog and its status as a distinct breed is disputable.

Sage Kuchi or Sage Jangi is the standard Persian name and the Pashto name is De Kochyano Spai or Jangi Spai, meaning "Dog of the Nomads" and "Fighter Dog". It is found around the central and northern parts of Afghanistan. This mountain dog shares similar genetic background to the Central Asian Ovtcharka (CAO).

Because the dog is intricately associated with nomad life in remote and rugged regions where Western breeding techniques are not used, it is difficult to identify a "true" Kuchi type dog. Warfare and general unrest in the region has also affected the Kuchi people, of whom many have settled around cities, creating ample opportunity for the Kuchi to interbreed with other dogs. There is no organizing body for dogs in Afghanistan and some Kuchi dogs have been exported to Europe.

The Kuchi dog breed possesses a very rich gene pool and the dogs adapt well to varying environments. It also means that gene expression can vary greatly from one individual to another. For that reason, it is often difficult for an unaccustomed observer to determine what makes a particular dog a true Kuchi dog, or what type of a Kuchi dog it is.

"The dogs of Ghor are mentioned in the earliest descriptions of the province and were always regarded as particularly special mastiffs. According to the Seljuk chronicles of the eleventh century there was:'A remarkably fine breed of dogs in Ghor so powerful that in frame and strength every one of them is a match for a lion.' The king of the Turquoise Mountain had two Ghor dogs, one named after him and one after the ruler of Ghazni. He would make them fight. It was dangerous to be around him on days when his namesake lost. These dogs formed part of the tribute from the Ghorids to the Seljuk and became such proverbial parts of Islamic culture that a medieval scholar is recorded as saying that 'Avicenna could not fight with a dog from Ghor'. Their build is Molosser-like with lighter and heavier variants, all of them exhibiting a perfect scissor-bite, and a majority of them free from most genetic defects like hip dysplasia. The shape of the head of a Kuchi dog can vary from a wedge-type head to a brick-type or a bear-type skull, the last one being associated mainly with the dogs of the mountain variety. Their tails are usually docked by about one-third of their length and usually point straight up or at a slight angle. Traditionally, their ears are cropped, almost to the very base. The Kuchi dogs are tall dogs, with a straight backline, which usually forms a square profile with the front and hind legs. The neck is usually long and thick, with plenty of excess skin hanging from the base of the jaw to the chest. The head is carried horizontally, or at a slight downward angle, with eyes staring straight ahead. The muzzle is dry and muscular. Their body is often covered with dark spots which do not show through the coat. These spots can also cover the inside of the mouth, the bridge of the nose and the abdomen. The color of the coat comes in many varieties and is of no importance to determining the breed or the type of Kuchi dog. Neither is the length or structure of the hair. Most often, a strip of longer, more wiry hair covers the entire length of the backline, while the neck area is packed with thick and slippery underwool, as well as hair that is slightly longer than over the rest of the body. The tooth sizes range from small in some females to very large in males, with the fangs often exceeding 1¼. The shape of the fangs can form a hook with a thicker base and the point directed toward the inside of the mouth, or can be straighter and tusk-like, much like a wolf's."

There are three main regional types recognized, belonging to one of two body types of dogs – the lion-type and the tiger-type. Those are determined depending on the build and the motor characteristics.

The Kuchi dogs can roughly be divided into three types: the mountain-type, the steppe-type and the desert-type.

Another way to classify the Kuchi dog could be according to a lion-type (Djence Sheri), or a tiger-type (Djence Palangi). This division applies mostly to the desert-type dogs, but it is important to keep in mind that each of the regional variants can display characteristics found in other types as well.

The difference between the two can also be seen in the way they move. The lion-type dogs are more majestic in motion, they appear very proud thanks to keeping their heads raised while they walk.

The tiger-type dogs exhibit more of a sidewinding, catlike motion, with the head usually at the level of the body, and front paws swinging inwards when walking, running, or jumping. Both types are extremely agile and possess tremendous speed and tenacity when running or attacking.

The Kuchis travelled from the mountains, through the deserts, in the freezing cold and in the searing heat, through country that, for days, did not offer shelter, food, or even water. They needed dogs that would survive in all kinds of extreme conditions, and still be able to perform their duties without hindering the progress of the caravan. They often had no spare time or energy left to feed and take care of their dogs. They could not afford to wait for them if they fell ill, or to keep checking to make sure they did not fall behind or run off.

The Kuchis needed dogs that would be fierce and possess unmatched stamina, courage and strength, but at the same time would be extremely intelligent, trustworthy and independent. They needed dogs that could function without any special guidance or training.

The resulting breed can be described as representing dogs of unwavering character, strong sense of pride and keen sense of ownership, social status and territory, demonstrating outstanding tenacity and perseverance, and possessing unrivalled strength and agility, all of which enable them to defend everything that is a part of their turf and extended pack against all predators and intruders.

They can also be extremely friendly and affectionate and tend to form deep emotional bonds with their 'pack members'. However, their independent minds also make them incompatible with the Western lifestyle. They are prone to aggression towards most other dogs, and often humans, who encroach on their territory (this could include postal workers, utility company repairmen, emergency personnel and even friends and family members they have not been acquainted with before) and their territory could extend well beyond the regular house and backyard.

This breed is also very vocal in expressing their emotions. Kuchi dogs often growl to show either pleasure or displeasure, which can be misconstrued by many, especially children, as a sign of aggression - and lead to unwanted and potentially dangerous reactions on their part. This does not mean that the Kuchi breed is entirely unmanagable. But it does mean that, in order to maintain safety and keep Kuchi dogs and their owners in good health and spirits, these dogs demand special attention from their owners, who should be experts on this particular breed and on animal behaviour in general.