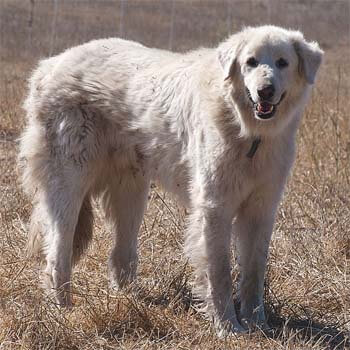 The Akbash Dog (from Turkish: Akbaş 'white head') is native to Turkey, and it is primarily used as a livestock guardian dog or shepherd dog. It is officially recognized by the KIF, a.k.a. the Turkish Kennel Club. This dog is one of the national dog breeds of Turkey.

The Akbash is a large dog, weighing from 75 to 140 pounds (34 to 64 kg), averaging 90 pounds for the female, and 120 pounds for the male. Akbash dogs range from about 27 to 32 inches (69 to 81 cm) tall. The Akbash tends to be leaner than other Turkish livestock guardian dog breeds (Kangal and Anatolian Shepherd), and some Akbash dogs may also be taller.

The Akbash has a smooth-short to medium-full white double coat (sometimes with light biscuit coloring at the ears). The dogs have long legs, a tail that curls and is frequently feathered, and pink skin blotched with black or blackish-brown under the white coat. Eye rims, nose and lips should be completely black or blackish-brown, but they may also be lighter, especially during cold winter months.

Akbash dog genetics may derive from a combination of molosser and sighthound breeds since they possess characteristics of both types. Although there is a great deal of variation in size and height of individuals, Akbash Dogs have a reputation for being tall with long, strong, flexible bodies. They have loose skin around their necks to help protect them from predators during fights. Heads can range from medium to heavy, though medium is preferred. Purebred Akbash Dogs may or may not be born with rear double dewclaws. Lack of, or possession of rear double dewclaws in an Akbash is no indication of recent interbreeding with other livestock guardian breeds nor any other breeds.

Currently, it is legal to export Akbash Dogs from Turkey but not Kangal Dogs. Kangals are considered the national dog breed of Turkey.

The Akbash personality tends to be calm and aware. The breed is neither shy nor aggressive. When used as a guard dog, it is suspicious of strangers in its territory, and alert to unusual sounds or changes in the environment. The breed is not naturally hostile, and is instead, naturally discerning, bred to think independently. The Akbash can be powerful against predators, yet, when properly exposed, be gentle with newborn lambs and goat kids. The usual first means of protection by an Akbash is to warn potential threats by posturing, barking and/or growling. The Akbash will chase away a predator or engage in physical combat if necessary.

Although the Akbash is frequently mistakenly referred to as a herding dog, they do not chase and round up livestock. Akbash Dogs should never chase livestock, although occasionally they may move their charges away from danger. The Akbash is one of the more popular of about 30 breeds worldwide of Flock Guardians, Livestock Protection Dogs, and Livestock Guardian Dogs (LGDs).

In their role as livestock guardian dogs, Akbash Dogs frequently spend long hours lying with flocks or herds. The Akbash is a relatively low energy breed, although they are said to always be thinking and taking in what is happening around them (and that they "sleep with one eye open"). They regularly patrol the perimeters of their territory, listening, sniffing and looking beyond the fence lines. Like their sighthound ancestors, the vision of Akbash Dogs is excellent. They reserve much of their physical energy for possible encounters with predators.

When protecting their charges they have tremendous power, focus, endurance and perseverance. Their great speed, loose neck skin, flexible bodies and bounding athleticism give them the physical edge they need to excel as livestock protection dogs. Most predators will not openly confront a working Akbash Dog. To avoid injuries to livestock protection dogs, and to better protect flocks and herds, more than one dog should be used in many working situations. Predators are less likely to challenge several protection dogs than a single dog. This is especially important when wolf packs, grizzlies and cougars are the prevalent threats.

The Akbash is uncommon as a companion dog. When trained appropriately from puppyhood on, they will get along with other domestic species. Since the Akbash has been bred to think on its own, dogs of this breed can be a challenge to train for obedience exercises. They have been bred not to chase their charges, so they tend not to be as interested in chasing balls or in games of fetch. They prefer large areas and may become discontent and, if relegated to a pen or small yard, may exhibit problem behaviors, like escaping or being destructive. Akbash Dogs require tall secure fencing for best containment. The Akbash is not a dog for everyone. It is a working breed and is happiest when given a job compatible to its breeding, or at the least, when kept mentally engaged. These dogs are known for their intelligence, bravery, independence and loyalty.

Akbash Dogs, like many large breeds, can be expected to live 10 to 11 years on average, with some living much longer. Akbash Dogs are capable of bonding very closely with their owners and other animals and can display a range of emotions and sensitivity unlike many other breeds. Like other breeds, they are susceptible to various infectious diseases and conditions to varying degrees.