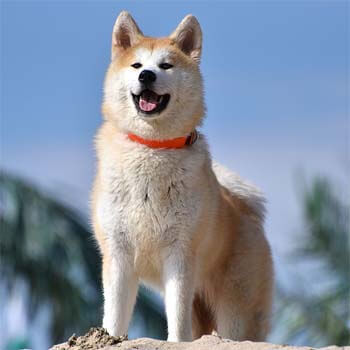 The Akita (秋田犬 Akita-inu, Japanese pronunciation: [akʲita.inɯ]) is a large breed of dog originating from the mountainous regions of northern Japan. There are two separate varieties of Akita: a Japanese strain, commonly called Akita Inu (inu means dog in Japanese) or Japanese Akita, and an American strain, known as the Akita or American Akita. The Japanese strain comes in a narrow palette of colors, with all other colors considered atypical of the breed, while the American strain comes in all dog colors. The Akita has a short double-coat similar to that of many other northern spitz breeds such as the German Shepherd or Siberian Husky, but long-coated dogs can be found in many litters due to a recessive gene.

The Akita is a powerful, independent and dominant breed, commonly aloof with strangers but affectionate with family members. As a breed, Akitas are generally hardy, but they have been known to be susceptible to various genetic conditions and can be sensitive to certain drugs.

In all countries except the United States, the Japanese and American strains of Akita are considered two separate breeds. In the United States, however, the two strains are considered a single breed with differences in type. For a while, the American strain of Akita was known in some countries as the Great Japanese Dog. Both forms of Akita are probably best known worldwide from the true story of Hachikō, a loyal Akita who lived in Japan before World War II.

As a spitz breed, the appearance of the Akita reflects cold weather adaptations essential to their original function. The Akita is a substantial breed for its height with heavy bones. Characteristic physical traits of the breed include a large, bear-like head with erect, triangular ears set at a slight angle following the arch of the neck. Additionally, the eyes of the Akita are small, dark, deeply set and triangular in shape. Akitas have thick double coats, and tight, well knuckled cat-like feet. Their tails are carried over the top of the back in a gentle or double curl down the loin.

Breed standards state that all dog breed coat colors are allowable in the American Akita, including pinto, all types of brindle, solid white, black mask, white mask, self-colored mask, even differing colors of under coat and overlay (guard hairs). This includes the common Shiba Inu coloring pattern known as Urajiro. The Japanese Akitas, as per the breed standards, are restricted to red, fawn, sesame, brindle, pure white, all with Urajiro markings whitish coat on the sides of the muzzle, on the cheeks, on the underside of jaw, neck, chest, body and tail and on the inside of the legs.

There are two coat types in the Akita, the standard coat length and the long coat. The long coat is considered a fault in the show ring, however. The long coat, also known as Moku is the result of an autosomal recessive gene and may only occur phenotypically if both sire and dam are carriers. They have longer (about 3-4 inches in length) and softer coats and are known to have sweeter temperaments. It is believed that this gene comes from the now extinct Karafuto-Ken Samurai dog. Unlike their short coat cousins, the long coats are less highly prized and thus more affordable.

American Akitas are a low maintenance dog breed. Grooming them should be an easy process. They are fairly heavy shedders and can go heavier than normal two to three times per year. Specifically, Akitas "blow out" their coats twice a year. Daily brushing could be a good way to reduce this problem. This breed needs to bathe every few months, although it can be more often, depending on the needs of each owner. Toenails should be trimmed every month, and their ears should be cleaned once a week.

The Akita is generally seen as territorial about its property, and can be reserved with strangers. It is sometimes described as feline in its actions; it is not unusual for an Akita to clean its face after eating, to preen its kennel mate, and to be fastidious in the house. They are known to be intolerant of other dogs of the same sex, as stated in the AKC breed standard.

Since it is a large, powerful dog, the Akita is not considered a breed for a first time dog owner. The breed has been targeted by some countries' breed-specific legislation as a dangerous dog. The Akita is a large, strong, independent and dominant dog. A well-trained Akita should be accepting of non-threatening strangers, otherwise they will treat all strangers in an aggressive manner. As a breed they should be good with children; it is said that the breed has an affinity for children. Not all Akitas will necessarily have the same temperament.

Akitas tend to take a socially dominant role with other dogs, and thus caution must be used in situations when Akitas are likely to be around other dogs, especially unfamiliar ones. In particular, Akitas tend to be less tolerant of dogs of the same sex. For this reason, Akitas, unless highly socialized, are not generally well-suited for off-leash dog parks. Sometimes spontaneous, it needs a confident, consistent handler, without which the dog will be very wilful and may become very aggressive to other dogs and animals.

The Akita Inu is one of the most dominant dog breeds. Therefore, training should start in an early age of seven to eight weeks.

There are many autoimmune diseases that are known to sometimes occur in the Akita. These include, but are not limited to:

In addition to these there are also the immune-mediated endocrine diseases with a heritable factor, such as:

Other non-immune specific conditions known to have occurred in the Akita include:

There are two breed specific conditions mentioned in veterinary literature:

Predecessors of the modern Akita were used for hunting bear, wild boar and deer in Japan as late as 1957. They would be used to flush out the bear and keep it at bay until the hunter could come and kill it. Today, the breed is used primarily as a companion dog. However, the breed is currently also known to be used as therapy dogs, and compete in all dog competitions including: conformation showing, obedience trials, canine good citizen program, tracking trials and agility competition, as well as weight pulling, hunting and Schutzhund (personal protection dogs).