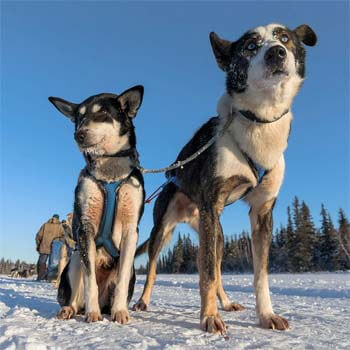 The Alaskan husky is not considered a pure breed. It is defined only by its purpose, which is that of a highly efficient sled dog. The husky is a blend of various Northern breeds, chosen particularly for skills such as pulling. Specializations in type exist within the category, such as freighting dogs (Mackenzie River husky, Malamute), sprint Alaskans (Eurohound), and distance Alaskans.

The Alaskan husky is the sled dog of choice for world-class dog sled racing. None of the purebred northern breeds can match it for sheer racing speed. Sprint-racing events such as the Fairbanks, Alaska Open North American Championship and the Anchorage Fur Rendezvous are invariably won by teams of Alaskan huskies, or Alaskans crossed with hounds or gun dogs. Hounds are valued for their speed and endurance. Winning sprint racing speeds often average more than 19 miles per hour (31 km/h) over three days' racing at 20 to 30 miles (32 to 48 km) each day.

The first dogs arrived in the Americas 12,000 years ago, however people and their dogs did not settle in the Arctic until the Paleo-Eskimo people 4,500 years ago and then the Thule people 1,000 years ago, both originating from Siberia. In 2015, a study using a number of genetic markers indicated that the Alaskan husky, the Siberian Husky and the Alaskan Malamute share a close genetic relationship between each other and were related to Chukotka sled dogs from Siberia. They were separate to the two Inuit dogs, the Canadian Eskimo Dog and the Greenland dog. In North America, the Siberian Husky and the Malamute both had maintained their Siberian lineage and had contributed significantly to the Alaskan husky, which showed evidence of crossing with European breeds that was consistent with this breed being created in post-colonial North America. The modern Alaskan Husky reflects a century or more of cross-breeding with Pointers, Shepherds, and Salukis to improve their performance.

Alaskan huskies are moderate in size, averaging 40 to 60 pounds (21 to 25 kg) for males, and 35 to 55 pounds (17 to 19 kg) for females. Some of them superficially resemble racing strains of the Siberian husky breed (which is part of the Alaskan husky genetic mix), but are usually smaller and leaner with a more pronounced tuck-up.

Color and markings can vary; Alaskans may be of any possible canine color and any pattern of markings. Eyes may be of any color. Coats are almost always short to medium in length, never long. The shorter coat length is governed by the need for effective heat dissipation while racing.

In very cold conditions, Alaskans often race in “dog coats” and/or belly protectors. Particularly in long distance races, these dogs often require “dog booties” to protect their feet from abrasion and cracking. The qualities of hardiness and climate resistance which are prevalent in breeds such as the Siberian husky and Canadian Inuit Dog are subordinated in the Alaskan husky to the overriding consideration of speed. On long-distance races, they require considerable care and attention on the trail at rest stops.

The Alaskan husky is generally a healthy dog. Some strains are prone to genetic health problems similar to those found in purebred dog breeds. These may include PRA, hypothyroidism, etc. Dogs with a congenital deformation of the larynx, termed "wheezers", occasionally occur. This disorder typically causes the dog to make a wheezing noise when breathing. The defect is suspected to be genetically linked. Theories of common exterior traits among "wheezers" abound, but are conflicting and undocumented. Because Mushers have selectively bred Alaskan Huskies to not be picky eaters, Alaskan Huskies are prone to be garbage eaters in urban settings. This tends to cause frequent stomach and bowel issues in urban Alaska.

The life span of the Alaskan husky is usually between 10 and 15 years.

Alaskan Huskies are generally very good with other dogs and gentle with people. They are ferocious eaters and can be food fixated.

The coat of Alaskan Huskies is self-cleaning. They can be trained or encouraged to be active swimmers. They don't take to retrieving naturally. Due to the inclusion of sight-hound in their genetic make-up, Alaskans can have very good vision and a strong nose. Alaskan Huskies can sometimes possess a strong prey drive.