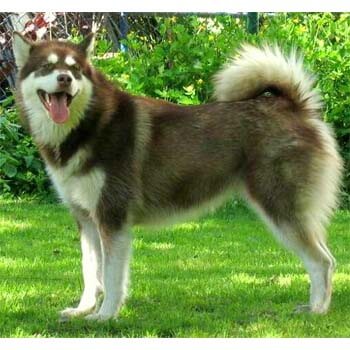 The Alaskan Malamute (/ˈmæləˌmjuːt/) is a large breed of domestic dog (Canis lupus familiaris) originally bred for their strength and endurance to haul heavy freight, and later as a sled dog. They are similar to other arctic breeds and spitz breeds, such as the Greenland Dog, Canadian Eskimo Dog, the Siberian Husky, and the Samoyed.

Although it is believed that the first dogs arrived in the Americas 12,000 years ago, people and their dogs did not settle in the Arctic until the Paleo-Eskimo people 4,500 years ago, followed by the Thule people 1,000 years ago, with both originating from Siberia. Malamutes were thought to be bred by the Malemiut Inupiaq people of Alaska's Norton Sound region.

The Malamute has been identified as a basal breed that predates the emergence of the modern breeds in the 19th Century. A study in 2013 showed that the Alaskan Malamute has a similar east Asian origin to, but is not clearly related to, the Greenland Dog and the Canadian Eskimo Dog, but contains a possible admixture of the Siberian Husky.

In 2015, a study using a number of genetic markers indicated that the Malamute, the Siberian Husky, and the Alaskan husky share a close genetic relationship between each other and were related to Chukotka sled dogs from Siberia. They were separate from the two Inuit dogs, the Canadian Eskimo Dog and the Greenland Dog. In North America, the Malamute and the Siberian Husky both had maintained their Siberian lineage and had contributed significantly to the Alaskan husky, which showed evidence of crossing with European breeds that was consistent with this breed being created in post-colonial North America.

The usual colors are various shades of gray and white, sable and white, black and white, seal and white, red and white, or solid white. There are a wide range of markings in the breed including face markings, blazes, a splash at the nape of the neck, and a collar or half collar. White is often the predominant color on the body, parts of the legs, feet and part of the markings of the face. In terms of color variants, some Malamutes exhibit a dark grey to buff-colored undertone around their trimmings and white areas, presenting with a color-linked gene known as AgoutiTwo agouti alleles, with the possibility of a third, appear to be found in Malamutes: aw (Agouti Pattern or Wolf/Wild Pattern), at (Tan Point Pattern or Black Pattern), and awat (Heterozygous Agouti or Dark Agouti).

The eyes of the Alaskan Malamute are almond-shaped and are varied shades of brown; however, the darker eye is preferred. The physical build of the Malamute is compact and strong with substance, bone and snowshoe feet.

According to the AKC breed standard, the Malamute's tail is well furred and is carried over the back like a waving plume. Corkscrew tails are occasionally seen but are faulted in the AKC breed standard (a corkscrew tail is commonly seen in the Akita). The Malamutes well-furred tails aid in keeping them warm when they curl up in the snow. They are often seen wrapping the tail around their nose and face, which presumably helps protect them against harsh weather such as blowing snow. Their ears are generally upright, wedge-shaped, small in proportion to the head and set to the side of the skull. The muzzle is deep and broad, tapering slightly from the skull to the nose. Nose and gums are black but some Malamutes have a snow nose, which is black with a pink undertone that can get darker or lighter, depending on the season.

Alaskan Malamutes are still in use as sled dogs for personal travel, hauling freight, or helping move light objects; some, however, are used for the recreational pursuit of sledding, also known as mushing, as well as for skijoring, bikejoring, carting, and canicross. However, most Malamutes today are kept as family pets or as show or performance dogs in weight pulling, dog agility, or packing. Malamutes are generally slower in long-distance dog sled racing against smaller and faster breeds, so their working usefulness is limited to freighting or traveling over long distances at a far slower rate than required for racing. They can also help move heavy objects over shorter distances. An adult male Alaskan Malamute can pull around 500–1,500 kilograms (1,100–3,300 lb) of weight, depending on build and training.

The Malamute has a long genetic foundation of living in harsh environments, and many of its behaviors have adapted to survive in such environments. Independence, resourcefulness, high intelligence, and natural behaviors are common in the breed.

Malamutes, like other Northern and sled dog breeds, can have a high prey drive, due to their origins and breeding. This may mean that in some cases they will chase smaller animals, including other canines, as well as rabbits, squirrels, and cats. While Malamutes are, as a general rule, particularly amicable around people and can be taught to tolerate smaller pets, it is necessary to be mindful of them around smaller animals and small children.

Malamutes are very fond of people, a trait that makes them particularly sought-after family dogs, but unreliable watchdogs as they do not tend to bark. Malamutes are nimble around furniture and smaller items, making them ideal house dogs, provided they get plenty of time outdoors meeting their considerable exercise requirements. Alaskan Malamutes also often participate in animal therapy programs, like visiting patients in hospitals, due to their soft nature. If they are year-round outdoor dogs, letting them play in a baby pool filled with cold water in summer keeps them cool. In the winter, they prefer snow.

Malamutes are usually quiet dogs, seldom barking. When a Malamute does vocalize, it often appears to be "talking" by vocalizing a "woo woo" sound. It may howl like a gray wolf or coyote, and for the same reason. A similar-looking Spitz dog, the Siberian Husky, is much more vocal.

There is only one known health survey of Alaskan Malamutes, a 2004 UK Kennel Club survey with a small sample size of 14 dogs. The median lifespan of 10.7 years measured in that survey is typical of a breed their size; however, this study had a sample size too small to be considered reliable and much anecdotal evidence suggests they have on average one of the longest lifespans of large dogs, up to 15 years. The major cause of death was cancer (36%).

The most commonly reported health problems of Alaskan Malamutes, in the 2004 UK Kennel Club survey (based on a sample size of 64 dogs) were musculoskeletal (hip dysplasia), and hereditary cataracts. There are additional health issues in the breed whose origins are unknown at this time including varied seizure disorders found in young puppies as well as adults, epilepsy, congenital heart problems, kidney problems and skin disorders.

Other health issues in Malamutes include Elbow dysplasia, inherited polyneuropathy, osteochondrodysplasia, cerebella hypoplasia, heart defects, and eye problems (particularly cataract and progressive retinal atrophy). A growing problem among arctic dog breeds, including the Alaskan Malamute, but especially their cousin, the Samoyed, is canine diabetes with onset occurring typically in middle age (5 to 7 years).

Another health issue with Malamutes is zinc deficiency. This breed cannot easily absorb zinc, and infections, skin, and coat problems can arise.

Thyroid disorders are the most common hormone issue in dogs, and hypothyroidism, the lack of thyroid hormone, is common in northern breeds including Malamutes.