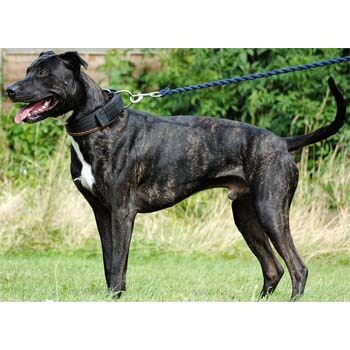 The Alaunt is an extinct breed of dog, with the original breed having existed in North Caucasus, Central Asia and Europe from ancient times through the 17th century.

In France, the Alaunt breed had three distinct types: the Alaunt Veantre, Alaunt Boucherie and Alaunt Gentile. They all were large, short-coated dogs of varying head-types. The former two resembled the molosser-type dogs much like the present-day Dogo Argentino or like the Caucasian Shepherd Dog except with short hair and a mesocephalic head which made them excellent large-game hunters. The Alaunt was originally bred by the Alani tribes, the nomads of Indo-European Sarmatian ancestry who spoke an Iranian language. The Alans were known as superb warriors, herdsmen, and breeders of horses and dogs. The Alans bred their dogs for work and developed different strains within the breed for specific duties. The breed was further developed in Spain, France, Germany, England, and in Italy.

The long, broad, flat head of the Alaunt should never be confused with the modified brachycephalic breeds. The brachycephalic head type is wide in base, but short in length. While the preferred bite is reverse scissor, like the Mastiff, and may have been a trait introduced by the Mongolian breeds at some remote time in history, skull type and bite type are separate subjects of genetic traits. The dolichocephalic skull is narrow at base yet long in length, so the Alaunt could be referred to as a modified dolichocephalic breed, as mesocephalic is a balance of base to length. Moreover, the Alaunt or Mastiff must be separated from the Molossoides in head study, as this term does not separate the Mastiff from the mountain dogs or even the Pug.

Contemporary enthusiasts are developing new breeds based on Alaunt bloodlines, such as the British Alaunt, New Alaunt, Antebellum Bulldog or Altamaha Plantation Dog, Dogo Belgrado, Abraxas bulldog and the American Alaunt. While its origins are strongly rooted in the ancient mountain dogs of the East, the Alaunt is regarded by some cynologists as the ancestor to the original bulldog breeds.