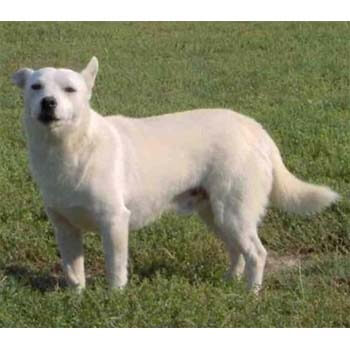 Alopekis is an ancient Greek breed of dog. The name Alopekis means “small fox” or “fox-like” in the Greek language. The breed is mentioned by several ancient Greek and classical writers such as Aristotle, Xenophon, and Aristophanes, and is depicted in many archaeological finds such as pottery, carvings, statuettes, sculpture, and tomb monuments.

According to the most universally accepted cynological classification (FCI Spitz and Primitive Types Group), the breed belongs to the Primitive Group of dogs. The Alopekis has erect ears, a wedge-shaped head, normal (scissors) bite and dentition and a mesomorphic, normal-symmetrical structure, body type and morphology. Typical specimens do not display elements of dwarfism. Their bodies are strong and their legs are neither bowed nor notably or disproportionately shortened. Acquired leg deformities are also undesirable characteristics. The breed's proportions suggest a gradual reduction in size over time (genetic sweep) due to evolution, selection and local adaptation. It is also possible that the breed shares some ancestry, together with the Cretan Hound, from the smaller and more slender Ethiopian Wolf (Canis simensis) and perhaps even the Southern sub-species Canis simensis citernii, rather than the larger and heavier Grey wolf (Canis lupus) ancestral species. Alopekis morphology suggests a natural – archaic dog type, ancestral / archetypical to the subsequent central European small Spitz/ Nordic and Terrier breeds. The Pomeranian dog, said to be a descendant of ancient Dalmatian / Illyrian dogs and especially those from the island of Melite / Melita (Mljet) in the Adriatic Sea, which used to be a Greek territory until the 12th century, is probably a descendant of the Alopekis and the Meliteo Kynidio / Small Greek Domestic Dog. Additionally, the hunting ability of the Alopekis, is a further indication that suggests a relation to other breeds of this group [Group V of the F.C.I. Classification that were developed in other Mediterranean regions after the Greek colonization in Southern Italy, Sicily, Malta, Cyrene, Corsica, Southern France, the Iberian Peninsula and the Balearic islands, probably with the influence of larger hounds such as the Cretan Hound, as suggested by the existence in Crete of a small type similar to the Alopekis, in morphology and use, as a hunting and utility dog, which in modern times is called Venetaki (possibly from the Latin venaticus = hunting as Crete was under Venetian occupation from 1212 to 1669); in ancient times this dog was possibly identical to the type called Κυναμολγός (Gr. Kynamolgos, cynomolgus = milking dog).

Alopekis dogs represent a type dating back to the pre-specialisation era, since they combine hunting, herding and guarding abilities and other primitive characteristics of conformation and behaviour. The passage from Ctesias, mentioned by Julius Pollux, about the Cynomolgus dogs of Crete, is especially interesting, as it refers to dogs co-existing with buffalo / cattle herds and even suckling the milking cows and competing with bulls. It is possible that descendants of those dogs travelled to Northern Europe with the Greeks, the Romans, the Celts and later the Romani people (according to folk traditions) and contributed to breeds such as the Welsh Corgi and the Lancashire Heeler. The ancestors of the latter are said to have been brought to Britain by Romani people from the Mediterranean. The fact that these breeds are the only (together with the Alopekis) small – size contemporary breeds specializing in cattle-driving and herding (cattle dogs being in their vast majority much larger and of molossoid / molosser type), is quite remarkable in itself; it could also be seen as additional evidence, apart from the obvious physical similarities, that there is a shared genetic relation and common adaptation and specialization of the herding instinct in all these three breeds, originating in the Eastern regions of Crete (where marshland habitats were ideal for water buffalo herds), given the specific importance of the bull worship in the island's ancient history. The bull games or taurokathapsia (bull-leaping), a form of gymnastics performed by young acrobats and bulls in ancient Crete, are quite well-known; reading Ctesias' report, one wonders if dogs were ever included, or used to control any bull that became too aggressive during the games or the training sessions. (This passage also underlines the co-existence and inevitable genetic interaction between Cretan populations of Alopekis and Cretan Hounds. According to a very interesting report recorded by the Hellenic Association for the Protection and Rescue of Native Farm and Domestic Animals Breeds “Amaltheia”, there was until very recently a group of Alopekis dogs escorting water buffalo herds in Northern Greece. One of the areas where the breed still co-exists with water buffalo (brought to Greece by invading armies during the Persian Wars) is Serres. And the breed still serves flocks of sheep and goats and cattle also, in other parts of the country, to this day.

Alopekis populations existed until recently all over Greece and some of their traditional uses were ratting and the extermination of mice and other small vermin, as well as protection of poultry, such as domestic chickens and ducks from the attacks of foxes; the small dogs can easily fit in the hen coops and curl up inside to spend the night on vigil against their namesake intruder; they also co-operate very well with the bigger flock- guardians and sheepdogs in the farm and on the field. The breed is an excellent and brave little watchdog and quite strong for its size. Before the mass importation of foreign breeds to Greece that started in the 1970s and '80s, the undisputed majority of small dogs in urban and rural areas were mostly Alopekis and Melieo Kynidio or Kokoni.

This charismatic, multi-purpose and ancient breed of dog is valued as a unique example of small canine evolution. However, their traditionally healthy gene pool has been threatened in modern times by urbanisation, farming pesticides, cross-breeding with foreign imported dogs and the lacking of a registering body. Although there is no specific data on the impact of this zoonosis on Alopekis populations, endemic proportions of the seasonal leishmaniasis infection are believed to be responsible as well. Exacerbating the problem are the low number of puppies per litter, the high mortality of newborn puppies in the rural environment, as well as the single-oestrus per year status of the breed. Also, despite the endangered status of the breed, many Alopekis have been neutered as a result of indiscriminate policies designed to curb the increase in the number of stray dogs. A group of scientists led by veterinary surgeon Prof. Spyros Chleiounakis have been monitoring a local population of the breed in a specific area of Northern Greece since 2005. The recent publication of their study and subsequent articles in the Greek and foreign press in February 2013, call for the protection of the last few pure Alopekis left in Greece.

A small group of dog lovers and canine historians and connoisseurs that have been championing the case for the small native breeds since the 1970s and '80s and have contributed, in 2004, to the successful recognition of one of these, the Kokoni, by the Kennel Club of Greece, is trying, in co-operation with Amaltheia volunteers, to attract attention to the plight of the Alopekis and the looming danger of extinction.

The breed occurs in three different coat varieties, all with an undercoat: a) relatively short, hard and flat, b) semi-long, profuse and harsh and c) a semi-long, hard, wire coat with some facial furnishings. The wire-haired variety is extremely rare. The coat must never be thin, sparse, soft and silky or lack a protective and insulating undercoat as the breed is a small utility dog that should be able to thrive outdoors as well as inside. Winters in the mountains of northern Greece can be quite harsh in particular, and the summers can be very hot, so a good coat quality is essential. The coat is easy to groom and inherently easy to keep clean by a caretaker. This is in part because Alopecis dogs are very clean by their nature and often groom themselves meticulously. The breed does not seem to attract as many external parasites as others.

All colours and combinations of colours are acceptable apart from total depigmentation (albinism). Typical colours include pure white, black or brown, as well as any bicolour combination of them: black and white, white with black or brown patches, black with white markings, brown with tan markings.

The Alopekis as a house companion is very affectionate, reliable, devoted, lively, active but not highly-strung nor yappy dog. The typical temperament is confident, outgoing, sociable, happy and very easy to train. Protective and caring towards the other house pets or animals, yet a determined enemy of vermin, a very diligent little worker, a capable hunter and retriever of game and quite playful. The breed is very good with children. As a utility dog and watchdog the Alopekis is courageous, vigilant, alert, spirited and able to cover the distance tirelessly, athletic and with very quick reflexes. At farm or city this is a very useful little working dog and escort that adapts well to all environments and is a joy to live with for dog-lovers of any age and lifestyle.

Alopecis dams, in contrast to modern breeds, only come to season once a year; they are very good mothers and easy whelpers. Litter size is typically 3, at the most 4 or 5 puppies. The breed enjoys excellent health and vitality and does not suffer for any known physical weaknesses. On the contrary they are quite robust little dogs that do well with moderate care and are not fussy eaters. Their average lifespan is 12–15 years in a domestic environment. Hereditary diseases have not been reported.

The breed is not yet recognized by any national or international organisation. The Kennel Club of Greece is reportedly waiting for an increase in population in order to consider the case. The breed hovers on the brink of extinction since the late 1990s.