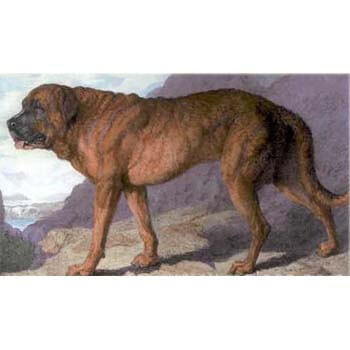 The Alpine Mastiff is an extinct Molosser dog breed, the progenitor of the St. Bernard, and a major contributor to the modern Mastiff (through such dogs as "Couchez"), as well as to other breeds that derive from these breeds or are closely related to them. M.B. Wynn wrote, "In 1829 a vast light brindle dog of the old Alpine mastiff breed, named L'Ami, was brought from the convent of Great St. Bernard, and exhibited in London and Liverpool as the largest dog in England." William Cavendish, 5th Duke of Devonshire, is believed to have bred Alpine Mastiffs at Chatsworth House.

The names "Alpine Mastiff" and "Saint Bernard" were used interchangeably in the early 19th century, though the variety that was kept at the hospice at the Great St. Bernard Pass was significantly altered by introducing other breeds, including Newfoundland and Great Dane, and it is this composite breed that now carries the name St. Bernard. Inevitably these mountain dogs filtered through to the wider population, and the original variety dwindled in its pure form, though a rare breed, the "Cane Garouf" or "Patua", found in the part of the Alps formerly inhabited by the Alpine Mastiff, may also descend from the extinct breed.

The Alpine Mastiff was, along with the Tibetan Mastiff and Caucasian Shepherd Dog, one of the earliest breeds of dog to reach truly gigantic size. It was one of the very first true mastiffs, originating in northern Europe before 500 B.C. The largest individuals may have reached more than 1 m (39 in) tall at the shoulder and weighed 160 kg (350 lb) or more, surpassing the modern Saint Bernard and English Mastiff in size. Beginning in the 1970s, there have been some efforts to breed back the Alpine Mastiff, mainly by using breeds such as the Saint Bernard, Great Dane, Great Pyrenees and Bernese Mountain Dog.