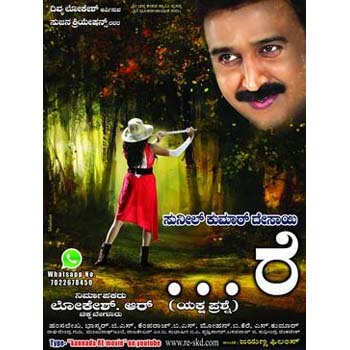 In an interview with New Indian Express, the director Sunil Kumar Desai said that the film revolves around the "'ifs' of our lives". Lead actor of the film Ramesh Aravind described the film as "an out of the box love story, which has deep meaning with weird characterisations". Anant Nag also felt that the movie had "serious messages" about Indian cultural heritage and Adi Shankara's Advaita philosophy. It has been touted as the comeback film of legends of Kannada cinema such as—director Sunil Kumar Desai, music director Hamsalekha and senior artists Loknath and Shivram. In an interview with the Times of India, Ramesh Aravind said that "Re" may seem like a film from the 70s or 80s and the "old world charm" of the film is intentional. The film makes a sweeping criticism at the state of open defecation in India.