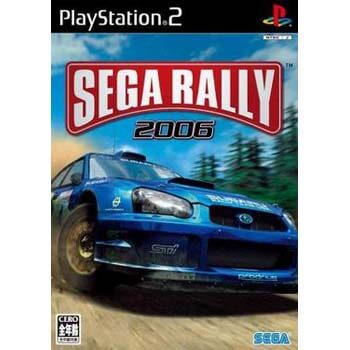 Sega Rally 2006 is an arcade oriented racing game developed and published by Sega for PlayStation 2. It is the third installment in the decade running Sega Rally series, and it was released in Japan on January 12, 2006. This version is the first non-arcade-version–based Sega Rally. Its action footage was used in World Rally Championship.

The Arcade Mode is based on checkpoints. The driver select between "Series 1" (Easy), "Series 2" (Normal) or "Series 3" (Hard) for a 4-stages championship with the goal to reach the pole position by the end of the series and to become the Champion. The driver starts each series from the 15th position and race on various predetermined weather/daytime conditions in European, Asian, African, North American, Scandinavian or Circuit rounds. It is possible to race the Arcade Mode with Professional, Extra or Career tuned cars. After completing the first Series, another set of stages is unlocked as "Series 4", "Series 5" & "Series 6". Beating this second set of stages unlocks the three "Extra" cars taken from Sega Rally Championship 1995.

Career is Sega Rally 2006's core with four race types: 1on1 Versus CPU, Race against seven AI controlled cars, Time Attack & Total time series Rally. The Career mode is divided in two steps Amateur and Professional each one with its own "Open", "Class 1" & "Class 2" series. The "Sega Rally Championship" is only available once the driver has become Professional.