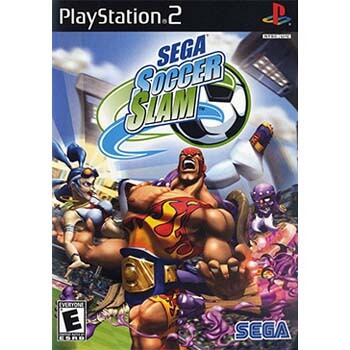 Sega Soccer Slam, also known as simply Soccer Slam, is a sports game released for GameCube, Xbox, and PlayStation 2 in 2002.

Sega Soccer Slam is different from traditional sports games in its exaggerated interpretation of soccer. It allows characters to punch one another and eliminates several other rules, such as throw-ins, corner kicks, free kicks, and penalties. Sega Soccer Slam includes an exhibition mode, a challenge mode, a practice mode, a tourney mode, and a quest mode. It also includes two minigames: Hot Potato and Brawl.

Practice mode is a step-by-step instruction of how to play the game, teaching the player maneuvers including steals, passes, shots, dekes, volleys, as well as more complicated moves such as spotlight shot and the killer kick (an incredibly powerful shot that can be accessed when the charge bottom at the bottom of the screen reaches its maximum through doing basic moves). The practice mode is essential for both masters and newcomers to prepare for the exhibition, tourney, challenge and quest parts of the game.

The exhibition mode is similar to that of most other sport games. In it, players are allowed to choose their opponent and team as well as a stadium to play in. They can also play two mini-games with up to four players: Brawl, which is where four of the characters fight against each other, and Hot Potato, a game where passing scores points, but when the ball explodes, anyone in the blast will lose points. Tourney mode is where the player can play in a tournament that lasts for 5 days of each team playing each other at least once through the competition. Challenge mode is when the player creates a custom team and compete in a series of matches to unlock nine secret characters, but each character can only unlock two secret characters.

Other than the gameplay options said above, Sega Soccer Slam also has a quest mode. In quest mode the player chooses one of the starting six teams and then competes in a series of ten games. Through winning these games the player can accumulate money which can be used to buy character art and power-up items. The character wears each item in order to enhance his or her attributes.

There are 3 teams that can be unlocked in the challenge mode: