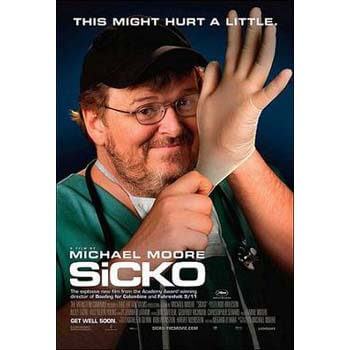 Sicko is a 2007 American political documentary film by filmmaker Michael Moore. Investigating health care in the United States, it focuses on the country's health insurance and the pharmaceutical industry. The film compares the profiteering, non-universal U.S. system with the non-profit universal health care systems of Canada, the United Kingdom, France and Cuba.

Produced on a roughly $9 million budget, Sicko grossed $25 million theatrically in North America. This exceeded the official expectation of The Weinstein Company, which had hoped to be in line with Bowling for Columbine's $22 million US box office gross.

According to Sicko, almost fifty million Americans are uninsured while the remainder, who are covered, are often victims of insurance company fraud and red tape. Furthermore, Sicko references the World Health Organization which lists the U.S. health in general as ranked 37 out of 191, with certain health measures, such as infant mortality and life expectancy, equal to countries with much less economic wealth. Interviews are conducted with people who thought they had adequate coverage but were denied care. Former employees of insurance companies describe cost-cutting initiatives that give bonuses to insurance company physicians and others to find reasons for the company to avoid meeting the cost of medically necessary treatments for policy holders, and thus increase company profitability.

In Canada, a citizen describes the case of Tommy Douglas, who was voted the greatest Canadian in 2004 for his contributions to the Canadian health system. Moore also interviews a microsurgeon and people waiting in the emergency room of a Canadian public hospital.

Against the backdrop of the history of the American health care debate, opponents of universal health care are set in the context of 1950s-style anti-communist propaganda. A 1950s record distributed by the American Medical Association, narrated by corporate spokesmodel Ronald Reagan, warns that universal health care could lead to lost freedoms and socialism. In response, Moore shows that socialized public services like police, fire service, the United States Postal Service, public education and community libraries have not led to communism in the United States.

The origins of the Health Maintenance Organization Act of 1973 are presented using a taped conversation between John Ehrlichman and President Richard Nixon on February 17, 1971; Ehrlichman is heard telling Nixon that "the less care they give them, the more money they make," a plan that Nixon remarked "fine" and "not bad". This led to the expansion of the modern health maintenance organization-based health care system. Connections are highlighted between Pharmaceutical Research and Manufacturers of America (PhRMA), the lobbying arm of the largest drug companies in the United States, lobbying groups in Washington D.C., and the Congress. Hillary Clinton, a champion of the Clinton health care plan, is shown as a crusader for change, appointed to reform the health care system in the United States by her husband, newly elected President Bill Clinton. Her efforts are met with heavy-handed criticisms by Republicans on Capitol Hill, and right-wing media throughout the country, who characterize her plan as the harbinger of socialism. When she is defeated, her punishment is to "never speak of it again while in the White House." Seven years later, her silence is rewarded, as she becomes a Senator via healthcare industry contributions, the second largest recipient in the Senate.

In the United Kingdom, a country whose National Health Service is a comprehensive publicly funded health care system, Moore interviews patients and inquires about in-hospital expenses incurred by patients, only to be told that there are no out-of-pocket payments. Moore visits a typical UK pharmacy, where pharmaceuticals are free of charge for all persons in Northern Ireland, Scotland and Wales and under 16, 16–17 in full-time education, disabled, unemployed, or over 60 in England, and subsidized in most cases for everyone else (in England); only a fixed amount of £6.65 (about $10) per item on a prescription was charged, irrespective of cost to the NHS. Further, NHS hospitals employ a cashier, part of whose job is to reimburse low-income patients for their out-of-pocket travel costs to the hospital. Interviews include an NHS general practitioner, an American woman residing in London, and British politician Tony Benn, who compares a hypothetical dismantling of the NHS to ending women's suffrage and says it would lead to a revolution.

In France, Moore visits a hospital and interviews the head of obstetrics and gynaecology and a group of American expatriates. Moore rides with the "SOS Médecins", a 24-hour French medical service that provides house calls by physicians. Moore discovers that the French government provides many social services and rights in addition to health care, such as daycare for $1 an hour, free college education, a minimum five weeks paid vacation by law, vacation, and neonatal support that includes cooking, cleaning, and laundry services for new mothers.

Returning to the United States, interviews disclose that 9/11 rescue workers who volunteered after the September 11, 2001 attacks were denied government funds to care for physical and psychological maladies they subsequently developed, including respiratory disease and PTSD-induced bruxism. Unable to receive and afford medical care in the United States, the 9/11 rescue workers, as well as all of Moore's friends in the film needing medical attention, set sail from Miami to Cuba on three speedboats in order to obtain free medical care provided for the enemy combatants detained at the U.S. Guantanamo Bay detainment camp. The group arrives at the entrance channel to "Gitmo" and Moore uses a megaphone to request access, pleading for the 9/11 victims to receive treatment that is on par with the medical attention the "evildoers" are receiving. The attempt ceases when a siren is blown from the base, and the group moves on to Havana, where they purchase inexpensive medicine and receive free medical treatment at the elite Hermanos Ameijeiras Hospital. Providing only their names and birth dates, the volunteers are hospitalized and receive medical attention. Before they leave, the 9/11 rescue workers are honored by a local Havana fire station.

Finally, Moore addresses the audience, emphasizing that people should be "taking care of each other, no matter the differences." To demonstrate his personal commitment to this theme, Moore decides to help one of his biggest critics, Jim Kenefick. According to a blog posting, Kenefick feared he would have to shut down his anti-Moore website because he needed US$12,000 to cover the costs of medical treatment for his sick wife. Not wanting the U.S. health care system to trump Kenefick's ability to express his opinion, Moore sends Kenefick the money himself.

This film ends with Moore walking towards the United States Capitol with a basket full of his clothes, sarcastically saying he will get the government to do his laundry until a better day comes for the sick and hopeless who are unable to receive health care.