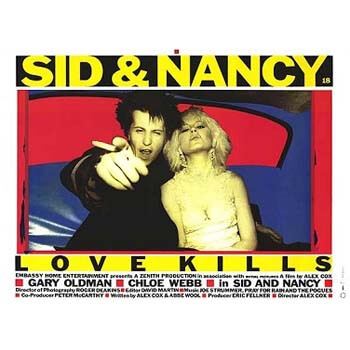 Sid and Nancy (also known as Sid and Nancy: Love Kills) is a 1986 British biographical film directed by Alex Cox, co-written with Abbe Wool, and starring Gary Oldman and Chloe Webb. The film portrays the life of Sid Vicious, bassist of the punk rock band the Sex Pistols, and his destructive relationship with girlfriend Nancy Spungen. The film also features supporting performances from David Hayman, Xander Berkeley, and Courtney Love.

The film premiered at the Cannes Film Festival in 1986, and was released theatrically in the United States later that year. Despite failing to recoup its production budget at the box office, the film was received positively by most critics and developed a cult following.

On 12 October 1978, police are summoned to the Hotel Chelsea in New York City, where they find Nancy Spungen, dead. Her boyfriend, Sex Pistols bassist Sid Vicious, is taken into custody. Nancy's friend, Gretchen, mourns her as paramedics remove her body. Sid is driven to a police station and upon arrival is asked to describe what happened. Police officers become frustrated when Sid is visibly troubled and unable to speak.

A little more than a year earlier, in 1977, close friends and band members Sid and Johnny Rotten meet Nancy, a heroin-addicted American groupie who had come to London to bed the Sex Pistols. Sid dismisses her at first, as her intentions are obvious, but begins dating her after feeling sympathy for the rejection she faces from fellow punk performers. The two swiftly bond over heroin use, and it is implied that Nancy introduces Sid to the drug.

Sid and Nancy fall deeply in love, but their self-destructive, drug-fueled relationship frays Sid's relationship with the rest of the band. Nancy is distraught when Sid departs on a month-long American tour without her. The tour is notably disastrous, with Sid strung out of his mind, often drunk or on methamphetamine, and physically violent. Phoebe, Sid's friend and road manager, unsuccessfully attempts to help him stop drinking. Meanwhile, Nancy remains in London, staying with her friend Linda, a dominatrix. Although several of Sid's friends and acquaintances warn him of Nancy's devastating effect on his life, Sid stubbornly ignores these warnings. On 17 January 1978, in the midst of the group's American tour, the band breaks up.

Sid reunites with Nancy in New York City, and he attempts to start a solo career with Nancy as his manager. The two visit Paris to begin recording sessions, but the trip is unfruitful. Sid is quickly dismissed in the music industry as a has-been, and he and Nancy descend deeper into heroin addiction; Nancy also begins suffering from severe depression, and the couple eventually make a suicide pact. Nancy brings Sid to Philadelphia to meet her family, who are horrified by the couple's reckless behavior and physical state. Sid and Nancy return to New York and settle in the Hotel Chelsea, where they isolate in squalor and depend on opiates supplied by their drug dealer, Bowery Snax.

Their love affair ends tragically one night when, during an argument in which Sid announces his plans to stop using heroin and return to England to restart his life, a suicidal Nancy begs him to kill her. She attacks him and they fight in a drug-induced haze, leading to him stabbing her, although whether it was intentional is left to interpretation. They fall asleep and later Nancy awakes and stumbles into the bathroom, where she collapses and dies. Sid is bailed out temporarily by his mother, who is also a heroin addict. After getting a pizza, some kids convince him to dance with them. Some time later, a taxi picks Sid up and he believes he finds Nancy alive in the back seat. The two embrace as the cab drives off.

A postscript says that Vicious died of a heroin overdose, and lastly reads: "R.I.P. Nancy and Sid."