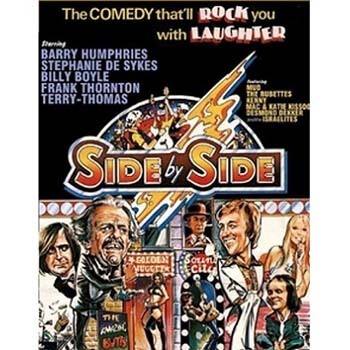 Side by Side is a 1975 pop comedy film, directed by Bruce Beresford. It tells the story of two rival nightclub owners played by Terry-Thomas and Billy Boyle. The cast also includes Barry Humphries, Stephanie de Sykes, Frank Thornton and many contemporary pop artists such as The Rubettes, Mud and Kenny.

Set in the fictitious English borough of Sludgely, the film centres on two rival nightclubs, located side by side. The decrepit Golden Nugget, which features strip shows and music hall variety turns, is run by Max Nugget (Terry-Thomas), assisted by his hypochondriac nephew Rodney (Barry Humphries), while Sound City is a pop music club, run by Gary (Billy Boyle). A local magistrate rules that only one club's license will be renewed at the end of the month. The two clubs then attempt to improve their entertainment by attracting top acts. The film culminates in a comedic brawl in which a dividing wall is smashed, resulting in a merger between the two venues.