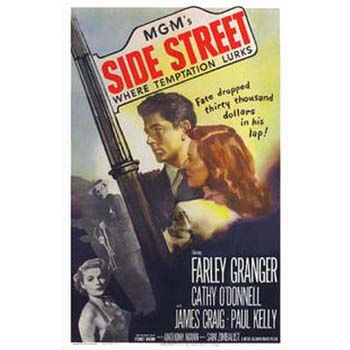 Side Street is a 1950 American film noir/police procedural directed by Anthony Mann.

The motion picture was filmed on location throughout New York City and culminated in one of the first modern car chases, before 1968's Bullitt. Part of the story is set in the vicinity of the long-demolished Third Avenue El, a favorite location of the few films made in the city during that era.

The cast features Farley Granger and Cathy O'Donnell for the second and last time; their earlier film was the noted noir They Live By Night (1948).

Joe Norson (Granger) lives with his wife and her parents in New York City; he has lost his gas station and found work as a part-time mail carrier. Because he wants the best for his expectant wife Ellen (O'Donnell), Joe rationalizes stealing what he thinks is $200 from a lawyer's office on his route. He discovers that he's actually stolen $30,000 from Victor Backett (Edmon Ryan), a corrupt attorney. Backett has framed wealthy broker/patsy Emil Lorrison (Paul Harvey) in a sex scandal, then extorted the money from him with the help of Lucille "Lucky" Colner (Adele Jergens) and ex-con and accomplice Georgie Garsell (James Craig).

From the start, Joe begins to panic. He explains his newfound wealth to Ellen as a lucrative out-of-town job, then disguises the money as a package and leaves it with bartender Nick Drumman (Ed Max). In the meantime Lucille's body is found in the East River, strangled, and Captain Walter Anderson (Paul Kelly) of the New York Police Department investigates the murder. Both Lorrison and Backett are interviewed, their names having been found in Lucille's "love diary." After the birth of his child, Joe decides to try to return his ill-gotten gain, but Backett suspects a trap and refuses the offer. Backett instead sends Garsell and a taxi driver to grab Joe and recover the cash. Joe is able to escape after they discover that Drumman has substituted a nightgown in the package and gone into hiding with the money.

Joe looks for Drumman, but Garsell finds the bartender first, strangles him, and recovers the money. Joe confesses the original theft to Ellen, who urges him to turn himself in, but he finds himself a suspect in Drumman's murder. He tries to track down the source of the money to clear himself, even as Captain Anderson methodically pursues both men as suspects: Garsell for Lucille and Joe for Drumman. Joe locates Garsell's girlfriend, singer Harriet Sinton (Jean Hagen), but she betrays him to Garsell. Garsell plans to murder Joe and strangles Harriet to eliminate her as a witness. Captain Anderson is hot on their heels and a chase ensues through the early morning streets of New York. Garsell kills his partner and forces Joe to drive, but Joe deliberately crashes the taxi to end the nightmare. When Garsell tries to run out of the car, he is shot by the police and killed. Joe is carried out of the car by the police and taken into the ambulance. Ellen arrives just before he leaves for the hospital, and they embrace. Joe survives the accident; the police are able to learn the truth, so he is cleared.