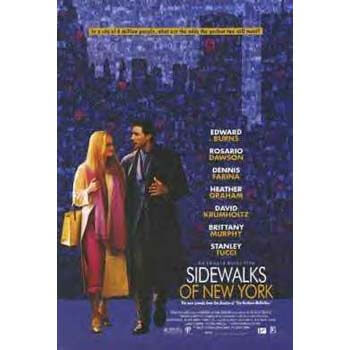 Sidewalks of New York is a 2001 American comedy-drama film written and directed by Edward Burns, who also stars in the film. The plot follows eight cycles in the lives of six Manhattan residents whose inter-connections form a circle that places each of them less than the proverbial six degrees of separation from the others.

The circle begins with Tommy Reilly, a onetime wannabe writer who became the producer of a weekly television entertainment news show by design rather than choice, and has stayed with it for the money rather than any professional satisfaction. Dumped by his live-in girlfriend without warning, he temporarily moves in with colleague Carpo, an aging Lothario ready to offer unlimited — and sometimes useless — romantic advice.

At a video store, Tommy meets grammar school teacher Maria Tedesko. The two flirt, meet for coffee and begin to date. Maria, recently divorced, finds it difficult to commit to a new relationship and stops taking Tommy's calls. When she discovers she's pregnant, she attempts to reconnect with him, but at the last moment opts to lie and tell him she's leaving town and chooses to raise the child on her own.

Maria's ex-husband, who longs to reconcile with her, is Benjamin Bazler, an apartment house doorman and aspiring songwriter whose obsession is 1960s/1970s rock music. He shares his dream of becoming a full-time musician with Iowa transplant Ashley, an NYU student working as a coffee shop waitress to support herself.

Ashley is involved in an affair with considerably older married dentist Griffin Ritso. Although he professes to love his mistress, the once divorced Griffin shies away from leaving his wife Annie Matthews for fear of being a two-time loser at matrimony. Eventually, Griffin's inability to commit to their relationship causes Ashley to dump him and reject his advances to get her back as she becomes involved in a relationship with Benjamin.

Real estate broker Annie is unhappy with her marriage but too moral to consider having an affair. She finds herself confiding in and flirting with one of her house-hunting clients — Tommy Reilly. Thus the circle is complete. She finally leaves Griffin.

The narrative segments are intermingled with documentary-like interviews in which of the characters address the camera with their thoughts about sex, love, and relationships.