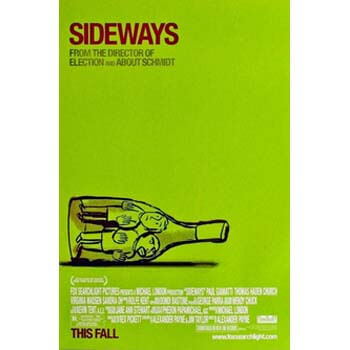 Sideways is a 2004 American comedy-drama road film directed by Alexander Payne and written by Jim Taylor and Payne. A film adaptation of Rex Pickett's 2004 novel of the same name, Sideways follows two men in their forties, Miles Raymond (Paul Giamatti), a depressed teacher and unsuccessful writer, and Jack Cole (Thomas Haden Church), a past-his-prime actor, who take a week-long road trip to Santa Barbara County wine country to celebrate Jack's upcoming wedding. Sandra Oh and Virginia Madsen also star. The film premiered at the Toronto International Film Festival on September 13, 2004, and was released in the United States on October 22, 2004.

Miles Raymond is an unsuccessful writer, a wine aficionado, and a divorced, depressed, alcoholic middle-aged English teacher living in San Diego. He takes Jack Cole, his soon-to-be-married actor friend and former college roommate, on a road trip through the Santa Ynez Valley wine country. At the beginning of this trip, he stops to see his mother before the day of her birthday. While there he steals a thousand dollars from her secret stash. Though Jack is still recognized on occasion, his acting career appears to have peaked years earlier, when he had a role in a popular TV soap. He now does commercial voice-overs and plans to enter his future father-in-law's successful real estate business. Miles wants to spend the week relaxing, playing golf and enjoying good food and wine. However, much to Miles' consternation, Jack is on the prowl and wants one last sexual fling before settling into domestic life.

In the wine country, the pair visit Miles' favorite restaurant, The Hitching Post II, and encounter Maya, a waitress with whom Miles is casually acquainted. Jack senses that Maya is interested in Miles, who believes she is married. Jack lies to Maya that Miles' manuscript has been accepted for publication, even though it is only being considered. As they are walking back to the motel, Jack tells Miles that Maya did not have a wedding ring on at the bar, implying that she is single as he suspected. At a tasting in a local winery, Jack and Miles meet a wine pourer named Stephanie, who is also acquainted with Maya. Jack is immediately attracted to Stephanie and arranges a double date.

During the date, Miles gets drunk and telephones Victoria, his ex-wife, after learning from Jack that she has remarried. The two couples go to Stephanie's home, where she and Jack adjourn to her bedroom for sex. Miles and Maya connect through their mutual interest in wine. While in Stephanie's kitchen, Miles awkwardly attempts to kiss her. As they are leaving separately, Miles gives her a copy of his manuscript, which Maya had earlier expressed interest in reading.

Jack's affair with Stephanie continues, to the point where he believes he's falling in love; he bonds with her daughter and suggests to a disgusted Miles that they move there for him to be closer to Stephanie. After spending time with Jack and Stephanie at wineries and a picnic, Miles and Maya return to her apartment and have sex. The next day, after spending time with her in town, Miles lets it slip that Jack is to be married. Disgusted with the men's dishonesty, Maya dumps Miles.

Jack and Miles go to a winery that Miles immediately calls mediocre. After receiving word from his literary agent that his manuscript has been rejected, an upset Miles tries to get the server to give him a "full pour" of wine. When the server refuses, Miles ends up drinking from the spit bucket in the tasting room, creating a scene. Jack intervenes and drives Miles back to the motel. Upon arrival, they meet Stephanie, who hits Jack in the face with her motorcycle helmet, screaming about his impending wedding and his supposed love for her. Miles takes Jack to the ER and leaves Maya an apologetic voice message, admitting that his book is not going to be published. That night, Jack hooks up with a waitress named Cammi, much to Miles' disgust. Hours later, Jack shows up at the motel – naked and confessing that Cammi's husband came home while she and Jack were having sex. Jack was forced to flee without his clothes and wallet (which contains a pair of irreplaceable wedding rings). He convinces Miles to sneak into the house, where he discovers Cammi and her husband having sex. Miles grabs the wallet and runs, barely escaping the irate husband, who pursues him in the nude.

To explain his broken nose to his fiancée, Jack intentionally damages Miles' Saab 900 convertible, giving the appearance they had been in an accident. The pair return to the fiancée's home, where Jack is welcomed with open arms. Miles drives away in his battered car.

Following the wedding ceremony, Miles runs into his ex-wife Victoria and meets her new husband. Victoria tells Miles that she is pregnant. Alone, Miles drinks his prized wine, a 1961 Château Cheval Blanc, from a disposable styrofoam soda cup at a fast-food restaurant. Time passes as Miles returns to the routine of teaching school. One day he receives a voicemail from Maya, who says she enjoyed his manuscript and invites him to visit. Miles drives back to wine country and knocks on Maya's door.