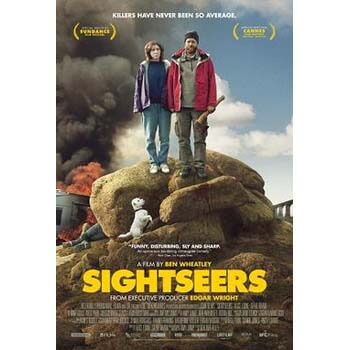 Sightseers is a 2012 British horror comedy directed by Ben Wheatley and written by and starring Alice Lowe and Steve Oram, with additional material written by co-editor Amy Jump.

It is produced by Edgar Wright and Nira Park, among others. The film was selected to be screened in the Directors' Fortnight section at the 2012 Cannes Film Festival.

Chris (Steve Oram) is a caravan fan and aspiring writer who takes his girlfriend Tina (Alice Lowe) on a road trip, much to the chagrin of Tina's mother (Eileen Davies), who has never forgiven Tina for the death of their dog "Poppy". At their first stop, the National Tramway Museum, Chris confronts a man (Tony Way) who is littering, and the man refuses to pick up his rubbish. When they get back to their car, Chris runs him over and kills him. Chris claims that the death was an accident, but smirks after the impact, unseen by Tina. Chris tells Tina that she is his muse.

They meet Janice (Monica Dolan), Ian (Jonathan Aris) and their dog Banjo (who resembles Poppy) at a caravan park and Janice reveals that Ian is a published writer, something that makes Chris jealous. The next morning Ian goes for a walk. Chris follows him, hits him in the head with a rock, steals his camera and pushes him off a cliff. Tina takes Banjo with them as they go. Tina finds photos of Ian and Janice on the camera and confronts Chris, who confesses to Ian's murder. Tina accepts this. During a walk through a National Trust park, Banjo defecates on the ground and a tourist (Richard Lumsden) tells Tina to clear up the mess. Chris arrives and encourages Tina to claim that the man tried to rape her. A row ensues, and Chris beats him to death.

At the next caravan park, Chris meets Martin (Richard Glover), an engineer who is testing a mini-caravan that can be attached to the back of a bicycle. During a meal in a restaurant, Tina goes to the bathroom. When she returns, she finds Chris kissing the bride from the hen party at a nearby table as part of a bachelorette dare. Upset, Tina follows the bride outside and kills her by pushing her down a steep hill onto some rocks, observed by Chris. The next morning, instead of visiting a local tourist attraction, Chris says he is helping Martin make some modifications to his caravan. They argue, and Tina drives off alone. Upset, she calls her mother and is about to confess to the murders, when her mother hangs up. Later that night, Tina tries to seduce Chris by talking about their complicity in the murders, but he rejects her.

Chris wakes up to find Tina has left him sleeping in the caravan and is speeding down the highway. He calls her and tells her to pull over. Tina notices a jogger and runs him over. Chris is upset with her chaotic approach to the murders, believing himself to be justified in his choice of victims, and they argue before hiding the body at the side of the road. They drive to a mountain, where they set up camp with the Ribblehead Viaduct in sight, the final destination on their holiday. When a hailstorm forces them back inside the caravan, Chris falls asleep and Tina looks at his notebook, finding a drawing of her and Chris standing on the viaduct, about to jump.

Martin arrives, with Banjo in the mini-caravan. While Chris is outside, Tina tries to seduce Martin, who is made uncomfortable by her advances and rejects her. When Chris returns, she tells him that Martin propositioned her in a particularly implausible and repulsive manner. Martin returns to his mini-caravan, and Chris and Tina have a fight over whether the dog should be called by the name "Poppy" or "Banjo". Upset, Tina pushes Martin's mini-caravan off the cliff, with him still in it. She re-enters their caravan and tells Chris that the problem is over. He runs outside, and finds Martin's dead body. He insults Tina and they fight, which ends in them having sex.

Chris sets the caravan on fire and kisses Tina. They run to the Ribblehead Viaduct and climb to the top, holding hands. Chris asks Tina if she enjoyed the holiday and she says it was brilliant. He apologises for insulting her and asks if she really wants to kill herself. Just as Chris steps off the viaduct, Tina lets go of his hand, watching as he falls to the ground and dies. Tina stares at her hand as the screen cuts to black.