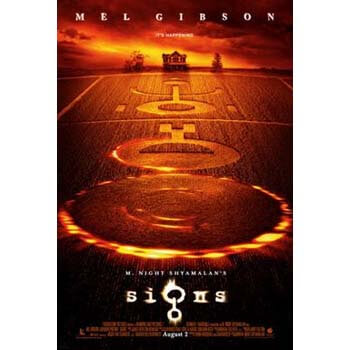 Signs is a 2002 American science fiction horror film written and directed by M. Night Shyamalan and produced by Shyamalan, Frank Marshall, Kathleen Kennedy and Sam Mercer. A joint collective effort to commit to the film's production was made by Blinding Edge Pictures and The Kennedy/Marshall Company. It was commercially distributed by Touchstone Pictures theatrically, and by Touchstone Home Entertainment in home media format. Its story focuses on a former Episcopal priest named Graham Hess, played by Mel Gibson, who discovers a series of crop circles in his cornfield. Hess slowly discovers that the phenomenon is a result of extraterrestrial life. It also stars Joaquin Phoenix, Rory Culkin, and Abigail Breslin. Signs explores the themes of faith, kinship, and extraterrestrials.

Following its premiere in theatres nationwide on August 2, 2002, the film grossed $227,966,634 in domestic ticket receipts screening at 3,453 theatres during its widest release. It earned an additional $180,281,283 in business through international release, to top out at a combined $408,247,917 in gross revenue. The film was nominated for multiple awards, including those from the Online Film Critics Society and the Empire Awards. The film also won an award from the American Society of Composers, Authors and Publishers. Considering its $72 million budget costs, the film was considered a strong financial success after its theatrical run, and was met with positive reviews from critics, with some praising its atmosphere and story but others criticizing aspects of the script. The high-definition Blu-ray Disc edition of the film featuring the director's audio commentary, the making of the film, and deleted scenes was released in the United States on June 3, 2008. The original motion picture soundtrack, which was composed by James Newton Howard, was released on the opening day by the Hollywood Records label.

Former Episcopal priest Graham Hess (Mel Gibson) lives on a remote farm with his asthmatic preteen son Morgan (Rory Culkin) and younger daughter Bo (Abigail Breslin). Graham's younger brother Merrill (Joaquin Phoenix), a failed minor-league baseball player, has been living on the farm to help out since Graham's wife Colleen died in a traffic accident six months earlier, shown in a series of flashbacks. Graham has since lost his religious faith and abandoned the church.

Large crop circles appear in the Hess's cornfield that are initially attributed to vandals. Soon after, other crop circles, eventually determined to be navigational guides, appear globally, and lights from invisible objects hover over Mexico and other cities later on. One night, Graham and Merrill chase a tall dark figure that disappears into the field. Graham later glimpses another one among the corn stalks, and strange clicking noises are heard over Bo's old baby monitor. In Brazil, an alien is filmed during a child's birthday party.

Ray Reddy (M. Night Shyamalan), the man responsible for Colleen's fatal accident, calls the Hess house but hangs up. Graham goes to investigate, finding Reddy sitting inside his car. Reddy expresses remorse for Colleen's death and Graham losing his faith. As he is about to drive to a lake, believing the aliens avoid water, Reddy warns Graham that a creature is locked inside his pantry. Graham investigates but leaves quickly when the trapped alien tries to attack him.

As a worldwide alien invasion begins, the Hesses barricade themselves inside their house. As several aliens break into the house, the family retreats to the basement. Morgan has an asthma attack but survives the night, despite being without his medication. The family emerge the next morning after radio reports say the aliens have abruptly abandoned Earth, stranding some aliens. The alien which had been trapped inside Ray Reddy's pantry enters the house and takes Morgan hostage. Recalling Colleen's dying words, Graham tells Merrill to, "swing away", using his baseball bat. The alien sprays Morgan with a toxic gas from its wrist. Graham recovers his stricken son as Merrill bashes the creature, hitting it into glasses of water left by Bo, the liquid scalding its skin. Merrill continues hitting the creature, eventually killing it. Outside, Morgan revives after Graham administers his medication. Morgan's constricted lungs prevented him inhaling the alien's poisonous gas, an act Graham attributes to God's intervention.

Months later, the Hess family has recovered from the ordeal. In the final scene, Graham is seen as having returned to the church, his faith restored.