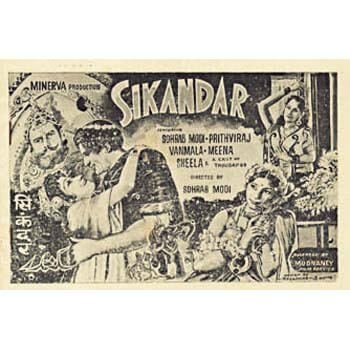 Sikandar or Sikander is a 1941 epic Bollywood film directed by Sohrab Modi and starring Prithviraj Kapoor as Alexander the Great.

The story is set in 326 B.C. The film begins after Alexander the Great (Sikander in Hindustani) conquers Persia and the Kabul valley and approaches the Indian border at Jhelum. He respects Aristotle and loves Persian Rukhsana (known in the west as Roxana). Sohrab Modi plays the Indian king Puru (Porus to the Greeks). Puru requests neighbouring kingdoms to unite against a common foreign enemy.

The story goes that when Sikander defeated Porus and imprisoned him, he asked Porus how would he like to be treated. Porus replied: "the same way a king is treated by another king". Sikander was impressed by his answer and set him free.