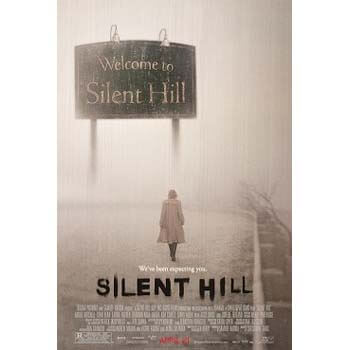 Silent Hill is a 2006 psychological horror film directed by Christophe Gans and written by Roger Avary, Gans, and Nicolas Boukhrief. The film is an adaptation of Konami's 1999 video game Silent Hill. It stars Radha Mitchell, Sean Bean, Laurie Holden, Deborah Kara Unger, Kim Coates, Tanya Allen, Alice Krige, and Jodelle Ferland. The film follows Rose, who takes her adopted daughter, Sharon, to the town of Silent Hill, for which Sharon cries while sleepwalking. Arriving at Silent Hill, Rose is involved in a car accident and awakens to find Sharon missing; while searching for her daughter, she fights a local cult while uncovering Sharon's connection to the town's dark past.

Development of Silent Hill began in the early 2000s. After attempting to gain the film rights to Silent Hill for five years, Gans sent a video interview to them explaining his plans for adapting Silent Hill and how important the games are to him. Konami awarded him the film rights as a result. Gans and Avary began working on the script in 2004. Avary used Centralia, Pennsylvania as an inspiration for the town. Filming began in February 2005 with an estimated $50 million budget and was shot on sound sets and on location in Canada (Brantford, Ontario and Hamilton, Ontario).

Silent Hill was released in Canada on April 21, 2006, by Alliance Atlantis and in France on April 26, 2006, by Metropolitan Filmexport and grossing $100 million worldwide. The film received mixed reviews, with critics praising the film's visuals, set designs, and atmosphere, but criticized the film for its dialogue, plot, and run-time. A sequel entitled Silent Hill: Revelation was released on October 26, 2012 to critical failure, but modest commercial success.

Rose Da Silva and her husband Christopher are deeply disturbed by their adopted daughter Sharon's constant sleepwalking and nightmares about Silent Hill, a town in West Virginia that was abandoned 30 years ago due to a massive coal seam fire. Against Christopher's wishes, Rose takes Sharon on a trip to Silent Hill to find answers. Her erratic behaviour concerns police officer, Cybil Bennett. Rose flees from Cybil, but when a girl steps out into the road, Rose crashes and blacks out. Waking up some time later, Rose finds herself in the foggy dimension of Silent Hill and realizes that Sharon is missing.

Searching the town for Sharon, Rose pursues the same girl she encountered prior to the crash, who turns out to resemble Sharon. At various points, the town transitions into a nightmarish dimension inhabited by inhuman monsters, including the fearsome Pyramid Head. Cybil catches Rose and tries to arrest her, but then finds out that they are trapped and all the road ends are gone. Rose runs away and is encountered by many other inhuman creatures. Rose survives the transitions and consequently learns of the existence of Alessa Gillespie, a young girl burnt by the Brethren, the town's fanatical cult. Her mother Dahlia wanders the streets as an outcast, guilty for her negligence that led to Alessa's doom. Rose is later joined by Cybil, also trapped in the foggy dimension of the town due to a giant fracture isolating Silent Hill. Meanwhile, in the real world, Christopher searches the abandoned town with policeman Thomas Gucci, but their search is in vain. Upon finding a photo of Alessa, Christopher goes to the orphanage where Sharon was adopted. Gucci appears, revealing he lived in Silent Hill and saved Alessa from the fire. He encourages Christopher to end his futile search and go home.

In the Silent Hill dimension, Rose and Cybil explore a hotel the Brethren once used, accompanied by Anna, a Brethren member, where they find the burnt remains of a ceremonial chamber. Rose also encounters the girl, revealed to be an aspect of Alessa. When the town transitions into the dark dimension, Rose, Cybil, and Anna flee to an old church but Pyramid Head emerges and skins Anna alive. Inside, Christabella, the high priestess of the Brethren and Alessa's aunt, suggests a "demon" knows where Sharon is. Her followers lead Rose and Cybil to a hospital, claiming the demon is in the basement. Christabella sees a photo of Sharon from Rose's locket and brands Rose and Cybil as "witches" due to Sharon resembling Alessa. Cybil fights the Brethren members but Christabella orders them to violently beat her.

Rose enters the basement, but she is barricaded by a group of weapon-wielding nurses who appear to be almost completely blind due to their disfigured, covered faces. Although light and sound attract them, Rose manages to sneak through them, inadvertently startling them into attacking each other. She flees and enters Alessa's room. In a flashback, it is revealed that Alessa was stigmatised by the townspeople for being a bastard. Christabella convinces Dahlia, a formerly devout Brethren member, to "purify" Alessa, after Alessa is raped by the school janitor while attempting to hide from her tormentors. Christabella immolates Alessa during a ritual but Dahlia realises this and alerts Gucci. They arrive too late as the ritual goes awry, igniting the infamous coal seam fire. Hospitalised, Alessa's rage grew and manifested as Dark Alessa, who is responsible for the shifting dimensions of Silent Hill. Her remaining innocence is later manifested as Sharon, who is taken to the real world to be adopted. Desperate to find Sharon, Rose allows Dark Alessa access to the church by fusing with her body. Meanwhile, Sharon, protected by Dahlia, is captured by the Brethren.

In the church, Christabella burns Cybil to death and plans to do the same to Sharon. Rose intervenes and confronts Christabella in regards to her crimes but Christabella stabs her in the heart in retaliation. Rose's blood summons both the original Alessa and Dark Alessa, who bisect and kill Christabella and her followers (excluding Dahlia) with razor wire. Rose rescues Sharon, and, upon seeing Dark Alessa, Sharon and Alessa/Dark Alessa reunite into one body. Rose and Alessa leave the town and return home. When they return home, it is revealed that they are still in the foggy dimension, separated from reality. Meanwhile, Christopher is alone in the real world but discovers that the front door has mysteriously opened.