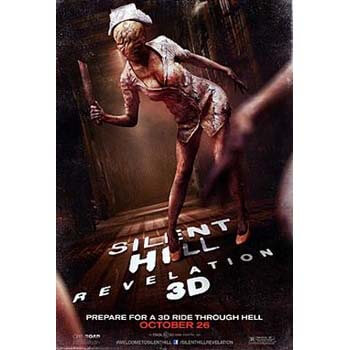 Silent Hill: Revelation is a 2012 psychological horror film directed and written by M.J. Bassett. It is a sequel to the 2006 film, Silent Hill, it stars Adelaide Clemens, Kit Harington, Martin Donovan, Malcolm McDowell and Carrie-Anne Moss, along with Sean Bean, Deborah Kara Unger and Radha Mitchell returning from the previous film. It is based on the survival horror video game Silent Hill 3 by Konami. Revelation's plot follows adult Heather Mason (Clemens) who, discovering on the eve of her eighteenth birthday that her presumed identity is false, is drawn to an alternate dimension existing in the fictitious American town of Silent Hill.

Bassett had expressed her openness to fans' suggestions of actresses for Heather's role. On a total estimated $20 million budget, filming lasted from March to May 2011 in Canada, with the 3D RED Epic camera used for the process; audio mixing took place in France.

Silent Hill: Revelation was released in Canada on October 26, 2012 by Open Road Films and in France on November 28, 2012 by Metropolitan Filmexport. The film was a moderate box office success, grossing over $56 million worldwide, but received negative reviews by film critics and fans alike.

In January 2011, Heather Mason (Adelaide Clemens) and her adoptive father Harry (Sean Bean), have spent the past few years moving from town to town and assuming different identities, including the names Heather Mason and Harry Mason. Heather believes that they are on the run from the police because Harry Mason (Christopher Da Silva) killed a man in self-defense and that her adoptive mother Rose Da Silva (Radha Mitchell) died in a car crash. In fact, he has been protecting her from a cult of Silent Hill, called the Order. Rose was able to free Heather (Sharon) from the fog world using one half of a talisman called the Seal of Metatron, but she herself remained trapped in Silent Hill.

Heather meets fellow student Vincent Cooper (Kit Harington), but she is haunted by hallucinations of Silent Hill. She is approached by private investigator Douglas Cartland (Martin Donovan) regarding her identity. Heather warns her father, but he is abducted by the Order and taken to Silent Hill. Unaware of this, Heather goes to a mall to wait for him, but enters the mall's Otherworld. Douglas explains he was hired by the Order to find Heather, but decides to help her when he discovered who his clients were. A monster, the Missionary (Liise Keeling), kills Douglas. Heather returns to the real world and flees, unfortunately leaving her a suspect of Douglas' murder.

Vincent escorts her home, but they find a message instructing Heather to go to Silent Hill. On the way to rescue her father, Heather reads a letter from her father detailing the truth of her background and lost memories. Heather and Vincent travel to the town, but stop at a motel, where Vincent reveals that he is the son of the Order's leader Claudia Wolf (Carrie-Anne Moss), and was sent by her to ensure Heather came of her own volition to Silent Hill. He reveals that Heather is a part of Alessa Gillespie (Erin Pitt), a girl whose immolation 38 years earlier by the Order led to creation of the town's shifting dimensions. The resulting argument triggers a shift to the Otherworld. The Missionary grabs Vincent, but not before he tells Heather to find his grandfather Leonard (Malcolm McDowell), who possesses the other half of the Seal of Metatron.

Heather ventures into the foggy dimension to find her father. She encounters Alessa's mother Dahlia (Deborah Kara Unger), who reveals that Claudia intends to complete the purpose intended for Alessa at her burning. After a shift to the Otherworld, Heather finds Leonard who, after informing her that the Seal of Metatron will reveal "the true nature of things," fuses Heather's half of the amulet with the one he possesses and becomes a monster. After being knocked out and carried off, Heather regains consciousness and grabs the amulet from within his body, killing Leonard. As she runs away, she summons Pyramid Head (Roberto Campanella), the entity created to protect Alessa (and by extension Heather), with her pleading and hides from him. Shortly after, she witnesses Vincent being taken away by the Order after being deemed insane by Claudia for betraying them.

Heather saves Vincent and they go to Lakeside Amusement Park where the Order's sanctuary is hidden. Dark Alessa (Erin Pitt and Adelaide Clemens), the manifestation of Alessa's wrath, confronts Heather who embraces her counterpart, absorbing her, and making Alessa complete once again. Heather confronts Claudia, who is holding Christopher and Vincent hostage. Claudia explains that Alessa's destiny was to be the incubator for a deity worshiped by the Order, who would punish all sinners upon its birth, completing Heather's destiny as well. Remembering Leonard's words, Heather gives Claudia the Seal of Metatron, revealing her to be the Missionary. Heather summons Pyramid Head, who kills the Missionary, allowing Heather to rescue Vincent and Christopher.

As the fog fades from the town, Christopher decides to stay in Silent Hill to find and free Rose, leaving Heather and Vincent to care for each other. They manage to hitch a ride away from the place in a truck driven by Travis Grady (Peter Outerbridge). Travis mentions to Heather (now referring to herself as Sharon) and Vincent that they were lucky he was there since he had not been driving in that direction for a long time. A couple of police cars, followed by a prisoner transport, enter the area of Silent Hill, which is then consumed by the fog. In a post-credits scene, Pyramid Head is seen walking through an unknown area in Silent Hill.