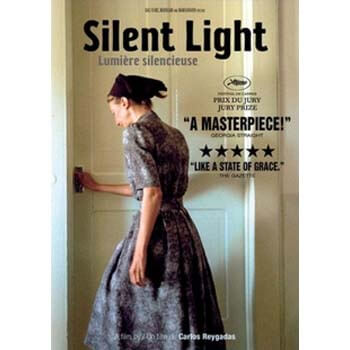 Silent Light (Plautdietsch: Stellet Licht) is a 2007 film written and directed by Carlos Reygadas. Filmed in a Mennonite colony close to Cuauhtémoc, Chihuahua State, Northern Mexico, Silent Light tells the story of a Mennonite married man who falls in love with another woman, threatening his place in the conservative community. The dialogue is in Plautdietsch, the Low German dialect of the Mennonites. The film was selected as the Mexican entry for the Best Foreign Language Oscar at the 80th Academy Awards, but it did not make the shortlist. The film was nominated for Best Foreign Film at the 24th Independent Spirit Awards. It gained nine nominations, including all major categories, in the Ariel Awards, the Mexican national awards.

Martin Scorsese described the work as "A surprising picture and a very moving one as well", while Barry Jenkins in 2019 named it as the best film of the 21st century. It was awarded the Jury Prize at the 2007 Cannes Film Festival. In 2017, the film was named the twenty-third "Best Film of the 21st Century So Far" by The New York Times.

Silent Light begins with a long tracking shot of the sun rising over a beautiful plain. The protagonist Johan, his wife Esther, and their children sit silently saying grace, after which each member of Johan's family departs from their home except for him. Once he is alone, he stops the clock on the wall and breaks down crying. Johan goes to work and discusses with a colleague that he is having an affair with a single woman by the name of Marianne; he makes it clear that his wife knows about the affair. Johan leaves work to meet Marianne in a field, and they begin to kiss. In the next scene, Johan's children are bathing and playing along a riverbank while he and his wife watch. They call one of their children over to bathe her, and as they are doing so, Esther begins to cry.

Johan tells his father about the affair, but when they step outside to discuss it, the scene shows winter. No explanation is provided for the change of season. Johan's affair with Marianne continues; they have sex in a local hotel while Johan's children wait in a van with a stranger - someone whom Marianne seems to know and trust. As Johan is driving in his car with Esther, she confronts him about the affair. She says she is going to vomit and forces him to stop the car. She runs off taking a blue umbrella, telling him not to follow. She breaks down crying along the side of a field, has what the doctor later describes as "coronary trauma," and dies.

At her wake, friends and family are there to provide comfort. Johan visits the body, says his goodbyes, and goes outside for air. Marianne suddenly shows up at the wake and asks if she can spend a moment with Esther's body, which Johan allows. Marianne enters the room, slowly kisses Esther's body on the lips, and drops a tear on her cheek. Esther appears to return to life as Johan's father sets the clock on a nearby wall. Johan breaks down again, before one of his daughters says that "Mum wants to see him." Marianne leaves silently as Johan prepares to enter the room in which Esther waits. The final few minutes of Silent Light are another tracking shot, with the sun setting.