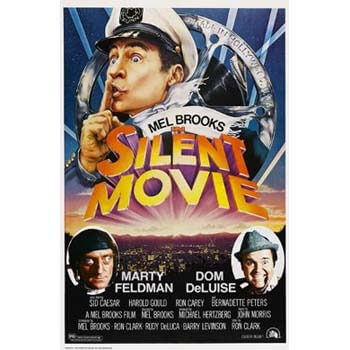 Silent Movie is an American satirical comedy film co-written and directed by and starring Mel Brooks, released by 20th Century Fox in the summer of 1976. The ensemble cast includes Dom DeLuise, Marty Feldman, Bernadette Peters, and Sid Caesar, with cameos by Anne Bancroft, Liza Minnelli, Burt Reynolds, James Caan, Marcel Marceau, and Paul Newman as themselves. The film is produced in the manner of an early 20th century silent film (but in color) with intertitles instead of spoken dialogue; the soundtrack consists almost entirely of accompanying music and sound effects. It is an affectionate parody of slapstick comedies, including those of Charlie Chaplin, Mack Sennett, and Buster Keaton. The film satirizes the film industry, presenting the story of a movie producer trying to get studio support to make a silent film, in the present-day of the 1970s.

Mel Funn (Mel Brooks), a once-great Hollywood film director, is now recovering from a drinking problem and down on his luck. He and his sidekicks Dom Bell (Dom DeLuise) and Marty Eggs (Marty Feldman) pitch to Big Pictures Studio's Chief (Sid Caesar) the idea to make the first silent movie in forty years. The Chief rejects the idea at first, but Mel convinces him that if he can get Hollywood's biggest stars to be in the film, it could save the studio from a take-over by New York conglomerate Engulf & Devour (Harold Gould and Ron Carey).

Mell, Dom, and Marty proceed to recruit various stars for the film. They surprise Burt Reynolds in his shower and go in disguise to his mansion. They recruit James Caan filming on location, following slapstick fumbling in an unstable dressing room trailer. They find Liza Minnelli at the studio commissary, who eagerly agrees to be in the film. They recruit Anne Bancroft by disguising themselves as Flamenco dancers at a nightclub. While visiting the ailing Chief in the hospital, Mel phones Marcel Marceau, who responds with the only spoken word in the film, in French: "Non!" They see Paul Newman on the hospital grounds, and sign him to the film after a wild chase in electric wheelchairs.

In the course of their search for stars, the trio have a number of brief misadventures, including a mix-up between a seeing-eye dog and an untrained look-alike, several (mostly unsuccessful) efforts by Marty to seduce various women, and a soft-drink dispensing machine that launches cans like grenades.

Engulf and Devour learn of the project, and try to sabotage it by sending voluptuous nightclub sensation Vilma Kaplan (Bernadette Peters) to seduce Mel. He falls for her, but returns to drinking when he learns that she was part of a scheme. He buys a huge bottle of liquor and drinks himself into a stupor, surrounded by fellow "winos". But Vilma has genuinely fallen for Mel and refused Engulf & Devour's money, and helps Dom and Marty find him and restore him to sobriety.

The film is completed, but the only copy is stolen by Engulf & Devour just before its theatrical premiere. Vilma stalls the audience with her nightclub act while Mel, Marty, and Dom successfully steal the film back. They are cornered by Engulf and Devour's thuggish executives, but use the exploding-soft-drink machine they encountered earlier to attack and subdue them. In the course of hurrying to the theater, Marty gets wrapped up in the film, and has to be rushed to the projection booth to show it.

The film is a huge success with the audience, which erupts with over-the-top applause. The studio is saved, and Mel, Dom, Marty, Vilma, and Chief celebrate, as an on-screen caption identifies the film as a "true story".