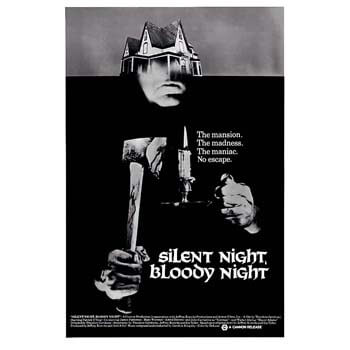 Silent Night, Bloody Night is a 1972 American slasher film directed by Theodore Gershuny and co-produced by Lloyd Kaufman. The film stars Patrick O'Neal and cult actress Mary Woronov in leading roles, with John Carradine in a supporting performance. The plot follows a series of murders that occur in a small New England town on Christmas Eve after a man inherits a family estate which was once an insane asylum.

Many of the cast and crew members were former Warhol superstars: Mary Woronov, Ondine, Candy Darling, Kristen Steen, Tally Brown, Lewis Love, filmmaker Jack Smith and artist Susan Rothenberg. It was filmed in Oyster Bay, Long Island, New York in 1970 but was not released theatrically until 1972 under the alternate titles Night of the Dark Full Moon, and in 1981 as Death House (sometimes stylized as Deathouse).

Although it is attributed to Zora Investments Associates in the credits, the film was never registered with the United States Copyright Office, and thus fell into the public domain.

On Christmas Eve 1950, Wilfred Butler dies in a burning accident outside his mansion in East Willard, Massachusetts. The residence is bequeathed to his grandson, Jeffrey. Twenty years later, in 1970, lawyer John Carter arrives in East Willard on Christmas Eve with his assistant and mistress Ingrid, having been charged by Jeffrey to sell the house. Carter meets with the town's leading citizens: Mayor Adams; Sheriff Bill Mason; the mute Charlie Towman, who owns the local newspaper; and Tess Howard, who operates the town's telephone switchboard. They all agree to buy the Butler mansion on behalf of the town for the bargain price of $50,000, which Jeffrey requires to be paid in cash the next day. Carter and Ingrid spend the night at the Butler mansion, but are brutally murdered in bed with an axe by an unseen assailant. After the murders, the killer places a crucifix in Ingrid's hand and proceeds to phone the sheriff, introducing himself as the house's owner and asking him to investigate Carter's disappearance. While talking with Tess, who forwards his call, the killer calls himself "Marianne".

At nightfall, Jeffrey arrives at the mansion to meet with Carter, but finds it locked and empty. He drives to the mayor's home, where he meets Diane, the mayor's daughter. The mayor has gone to the county's bank to obtain the required cash for the payment, so she redirects Jeffrey to the sheriff's office. Simultaneously, the sheriff heads to the mansion, but first stops at Wilfred Butler's disturbed gravesite, where he is beaten to death with a shovel. Failing to locate the sheriff, Jeffrey returns to the mayor's home, where Diane tells him she has received phone calls for her father from someone named "Marianne" who beckons her to the mansion.

Puzzled by the strange events, Jeffrey and Diane decide to drive to the mansion, but stop after they find the sheriff's abandoned car. The two stop by the newspaper office, where they meet Charlie, who informs them Tess has also gone to the mansion. Jeffrey and Charlie go after her while Diane researches the Butler house's history in the archives. Diane manages to piece together the Butlers' story: In 1930, Wilfred's wife died of tuberculosis. In 1933, his daughter 15-year-old daughter Marianne was raped and got pregnant; the son she gives birth to is Jeffrey, who was sent away to California. In 1935, Wilfred converted the mansion into a mental hospital and had Marianne committed. The rest of the story has apparently been redacted.

Tess arrives at the mansion and finds the sheriff's car running outside. In the foyer, she is greeted by the unseen killer, who bludgeons her to death with a candlestick. Jeffrey meanwhile arrives at Tess's house and finds it empty, after which he returns to Diane at the newspaper office. Diane tells Jeffrey that, based on her research, his mother did not die during his birth like he had thought. Jeffrey and Diane depart together to the mansion. En route, they pass Charlie's car, which has been set on fire; moments later, Charlie throws himself at Jeffrey's car and Jeffrey runs him over, killing him. Examining the body, Jeffrey realizes someone has cut Charlie's hands off.

At the mansion, Jeffrey finds his grandfather's diary in the foyer, which reveals he was the one who got Marianne pregnant. The diary recounts how Wilfred grew hostile toward the complacent hospital staff, so on Christmas Eve 1935, he freed the hospital's patients, causing a massacre that resulted in Marianne's death as well. He then ended up faking his death in 1950 and has been living anonymously in a nearby mental hospital ever since before escaping. Jeffrey tells Diane that his grandfather/father is still alive, and that the sheriff, Tess, Towman and the mayor were all former inmates Wilfred sought revenge on for the death of Marianne. The mayor arrives at the mansion armed with a rifle, and he and Jeffrey open fire, killing each other. The killer, revealed to be the elderly Wilfred Butler, finally appears, and Diane grabs Jeffrey's gun and shoots him dead.

A year later, Diane takes one last look at the Butler mansion before it is destroyed by a bulldozer crew.