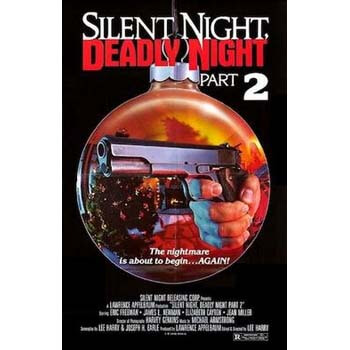 Silent Night, Deadly Night Part 2 is a 1987 American black comedy slasher film edited, co-written with Joseph H. Earle, and directed by Lee Harry. It is the sequel to 1984's Silent Night, Deadly Night, and was followed by Silent Night, Deadly Night 3: Better Watch Out! in 1989. Its plot focuses on Ricky Caldwell, the brother of Billy Chapman, and his own trauma regarding his parents' Christmas Eve murders, which triggers his own killing spree. The film relies heavily on flashbacks, utilizing approximately 40 minutes of archive footage from the original film.

The sequel picks up on Christmas Eve four years after the first movie, with Ricky Caldwell, the 18-year-old brother of the first film's killer, now being held in a mental hospital, sentenced there for life after a trial he had for a series of murders that he committed. While being interviewed by the psychiatrist Dr. Henry Bloom, Ricky tells the story of the murders his brother Billy committed throughout a series of several flashbacks using footage from the original film. These flashbacks have new shots to make Ricky appear in more of Billy's original story.

After this, Ricky tells his own story: after Billy's death, he was adopted and given a good upbringing, but his trauma was never treated. After his foster father's death, Ricky loses his composure and commits a series of random murders, targeting people who are "naughty". A chance for a normal life seems to appear when he starts dating Jennifer Statson, but an unpleasant encounter with Jennifer's ex-boyfriend Chip sends Ricky over the edge. He kills Chip by electrocuting him with jumper cables that are attached to a car while Jennifer watches, and uses the car antenna to strangle Jennifer to death. A security guard witnesses this and as Ricky is about to get arrested, he grabs the guard’s gun, shoots him in the forehead, and goes on a shooting spree. He kills at least three more people throughout a suburban neighborhood, including one man taking out his garbage (before shooting him, Ricky yells "Garbage Day!"; this scene would later become an internet meme). Later on, Ricky gets himself into a stand-off where he tries and fails to commit suicide before getting arrested by the police.

Cutting back to the present day, Ricky kills Dr. Bloom and escapes from the mental hospital, murdering a Salvation Army Santa and stealing the costume. Ricky plans a mission to accomplish what Billy failed to do, which was to kill Mother Superior. After chasing Mother Superior throughout her house, Ricky succeeds in decapitating her. Ricky cleans up the blood and stages the scene to make it look like Mother Superior sitting in a chair by placing the loose unconnected head on her body. As soon as this is discovered by the police officers that had arrived on the scene, a screaming Ricky leaps out and prepares to attack, but is shot down out the patio door. Sister Mary wakes up, and the police officer tells her, "He's gone, Sister. It's over." Then, she turns over and sees Mother Superior's severed head, before screaming in terror. Ricky, who had been shot by the cops, suddenly opens his eyes and smiles devilishly, indicating that he had survived his gunshot wounds. The final shot shows Billy's arm dressed in a Santa suit plunging a knife into the screen, before it freezes and the credits roll.