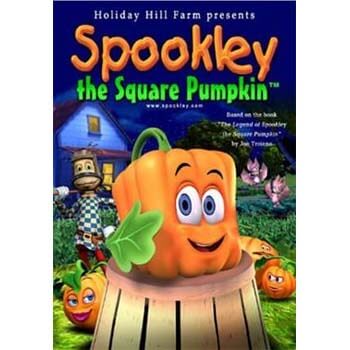 Two bats who live at Holiday Hill Farm, bug-eating Boris and bug-loving vegetarian Bella, discover an unusual sight in the pumpkin patch and rush to inform the farm's scarecrow, Jack, of their find: a young, innocent and square pumpkin, who identifies himself as Spookley. Jack takes a liking to Spookley, but Little Tom, a small pumpkin attached by a vine to the much larger Big Tom, immediately begins bullying Spookley and says only round pumpkins are real pumpkins. Jack quickly puts a stop to Little Tom's teasing.

Jack organizes the pumpkins in the patch to compete in the 'Jack-a-Lympics' contest, an athletic competition ("not affiliated in any way, shape or form with... those other games") designed to determine the "Pick of the Patch." Three spiders, who show sympathy for Spookley, decide to help him in the Jack-a-Lympics just so they can help themselves to the prize, a crown made of candy corn. Throughout the competition, Big Tom and Little Tom are repeatedly disqualified for using their vine to give them an unfair advantage, leaving third-place finisher Bobo, a vain female pumpkin, to win most of the events. Spookley turns out to be a total failure at all the events, leaving him discouraged.

As Bobo is crowned the winner and the spiders abandon Spookley to help themselves to her crown, a severe wind storm hits the pumpkin patch, pushing the pumpkins all over and pinning Jack under a flaming tree branch. Spookley, because he is square, does not roll away when the wind hits him (unlike the other pumpkins) and, through some moments of ingenuity, rescues Jack from being burned alive and his fellow pumpkins from being washed away in the river. The other pumpkins show gratitude for saving them.

After the storm, the farmer goes into the patch to assess the damage and discovers Spookley. The farmer is charmed by Spookley's square shape and decides to make the square pumpkin his own personal jack-o'-lantern.

The Honeydoos, three singing honeydews who sing in the style of The Pointer Sisters, are also featured. Bobby Pickett makes a brief cameo near the end of the film; his hit song "Monster Mash" is mentioned in one of the musical numbers "Transylvania Twist" (with a continuity error in that the latter claims the two dances are not the same, whereas "Monster Mash" claimed they were the same). Troiano and Zahn had previously written new music for Pickett's 1995 film adaptation of Monster Mash.