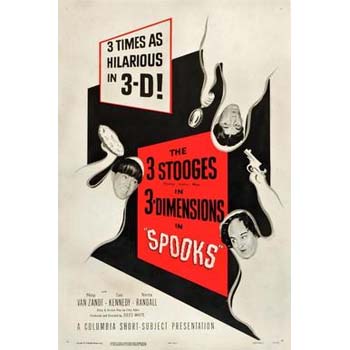 Spooks! is a 1953 short subject directed by Jules White starring American slapstick comedy team The Three Stooges (Moe Howard, Larry Fine and Shemp Howard). It is the 148th entry in the series released by Columbia Pictures starring the comedians, who released 190 shorts for the studio between 1934 and 1959.

The Stooges are private detectives that are hired to track down a kidnapped girl name Mary Bopper (Norma Randall), daughter of George B. Bopper (Frank Mitchell). They decide to trace Bopper back to where she was last seen, which leads them to mad scientist Dr. Jeckyl (Philip Van Zandt) and his assistant, Mr. Hyde (Tom Kennedy). There is also a gorilla kept imprisoned in the house for experimental purposes. The Stooges arrive to rescue the kidnapped girl disguised as door-to door pie salesmen.