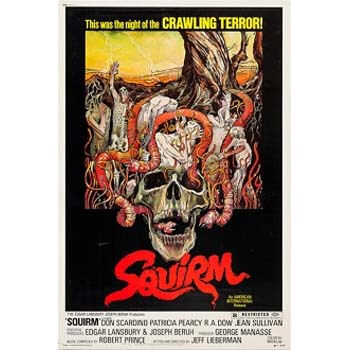 Squirm is a 1976 American horror film written and directed by Jeff Lieberman, starring Don Scardino, Patricia Pearcy, R.A. Dow, Jean Sullivan, Peter MacLean, Fran Higgins, and William Newman. The film takes place in the fictional town of Fly Creek, Georgia, which becomes infested with carnivorous worms after a storm. Lieberman developed the script based on a childhood incident in which his brother fed electricity into a patch of earth to cause earthworms to emerge at the surface.

Most of the financing came from Broadway producers Edgar Lansbury and Joseph Beruh. Millions of worms were used over the five-week filming in Port Wentworth, Georgia; worms were brought in from Maine to augment local supplies. Makeup artist Rick Baker provided special effects using prosthetics for the first time in his career. After American International Pictures picked up Squirm for distribution, it was edited to remove the more graphic scenes in an unsuccessful attempt to lower its "R" rating to "PG". The film was financially successful, but initially received lukewarm reviews; retrospective evaluations were more positive, and it has become a cult classic.

In the rural town of Fly Creek, Georgia, a powerful storm blows down an overhead power line, leaving the area without electricity. The power line lands in wet mud and electrifies the worms underneath. The next morning, Geri Sanders borrows a truck from her neighbor, worm farmer Roger Grimes, to pick up her boyfriend Mick, who is arriving from New York City for a vacation. While Geri and Mick go to town, Roger's shipment of 100,000 bloodworms and sandworms escape from the back of the truck. Mick enters a diner, where a customer says over 300,000 volts are being released into the ground from severed power lines. He orders an egg cream and finds a worm in it, though the owner and Sheriff Jim Reston believe he is joking.

Geri introduces Mick to her mother Naomi and sister Alma, before they both leave to browse at antique dealer Aaron Beardsley's house. Outside, Roger's father Willie finds the shipment of worms is missing. Roger sees Mick with Geri and becomes envious of their relationship. After arriving at Beardsley's house, Geri and Mick cannot find him, but Geri sees a human skeleton outside the property. They bring over Sheriff Reston but the skeleton disappears. Thinking it is another prank, Reston threatens to arrest Mick if he returns to the town. While asking locals about Beardsley's whereabouts, they find out he was last seen before the storm. Mick believes he himself unintentionally released the worms; he apologizes to Roger and invites him to go fishing with him and Geri. They find the skeleton in Roger's truck.

While on the boat, Mick is bitten by a worm. Roger shows his bitten-off thumb and tells Mick and Geri that worms attack when electrified. Mick gets off the boat to tend to his wound, leaving Geri with Roger; Mick and Alma take the skeleton's skull to an abandoned dental office, where they compare its teeth with X-rays and confirm the skeleton is Beardsley's. Roger makes advances towards Geri, but the worms they brought as bait attack him and crawl into his face. He runs off into the woods and Geri tells Mick what happened. Mick and Geri visit the worm farm to find Roger, but Mick finds Willie's body being eaten by worms. They try telling Sheriff Reston, but he ignores them. Mick deduces the worms killed Beardsley but cannot figure out why they attacked him.

While Mick and Geri are eating dinner with Naomi and Alma, the worms eat through the roots of a tree, causing it to crash into the house. Mick realizes electricity is still being released from the power lines and that the wet soil is acting as a conductor; he hypothesizes the worms only come out at night. Mick tells Geri to keep everyone inside equipped with candles and leaves to get plywood to board up the house. Roger, whose face has been deformed by worms, attacks Mick and knocks him unconscious. Roger enters the house and kidnaps Geri. The worms infest the house and attack other places in town. Sheriff Reston and a woman are eaten alive in a jail cell, and people at a bar are attacked and eaten.

Mick regains consciousness and finds Naomi's remains, covered in worms, at the house. When he goes upstairs, Roger attacks and chases him downstairs. Mick pushes Roger into a pile of worms, which engulf him. Mick frees Geri and tells her that Naomi, and presumably Alma, are dead. While they try escaping through a window, Roger crawls out of the pile of worms and bites Mick in the leg. Mick beats Roger to death with a flashlight before climbing onto a tree with Geri, where they stay until morning. Upon waking up, they realize the worms had disappeared and a repairman informs them that the power has been restored. Alma, who survived by hiding in a chest, comes out and looks out the window. Geri and Mick rush into the house to meet her.