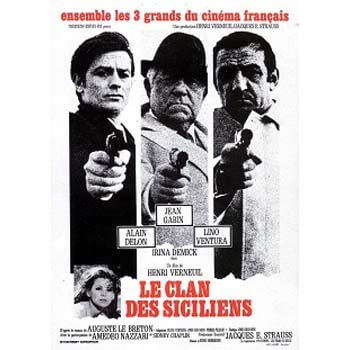 The Sicilian Clan (French: Le clan des Siciliens) is a 1969 French gangster film based on the novel by Auguste Le Breton. The film was directed by Henri Verneuil and stars Jean Gabin, Lino Ventura and Alain Delon, whose casting led to the film's box-office success in France. Ennio Morricone completed the score for the picture.

In Paris, jewel thief Roger Sartet escapes from custody with the help of the Manalese, a small-time but well-organised Sicilian Mafia clan led by patriarch Vittorio and which includes his sons Aldo and Sergio and son-in-law Luigi. In prison, Sartet got to know an electrician involved in setting up an extensive security system at a diamond exhibition in Rome — the electrician returned home early, unannounced, caught his wife in bed with a lover and shot them. Unaccustomed to prison life, he made friends with Sartet and bit-by-bit supplied him with details of the exhibition and its security system.

Vittorio and a fellow Mafiose, Tony Nicosia of New York City, go to the exhibition, only to find that changes make a simple robbery difficult. Furthermore, the exhibition hall is near a police station. Nicosia instead comes up with a plan to steal the diamonds while they are en route to another exhibition in New York and sends over Jack, an alcoholic, in order to pass on the details.

Meanwhile, Commissaire Le Goff pursues Sartet with unbridled determination — the gangster having killed two of his men in cold blood during an earlier arrest. Guessing that Sartet needs false papers in order to leave the country, Le Goff's enquiries lead him to the Manalese and their arcade game business which serves as a cover for their illegal activities. While he questions Vittorio, Sartet slips out of the building, under Le Goff's nose.

Jeanne, the wife of Vittorio's son Aldo and an able crook, becomes fascinated by Sartet. She has always felt out of place as the only French person in the Sicilian clan. While hiding out, she attracts Sartet's attention by sunbathing nude but as they kiss they are seen by Luigi's six-year-old son Roberto. Jeanne gets the boy to promise not to mention it to anyone.

In Rome, the gang discreetly kidnap Edward Evans, the insurance man sent to oversee the transfer of the diamonds to New York. Sartet takes his place and joins the other officials accompanying the diamonds on a regular scheduled flight. Among the passengers joining the plane are Jack, Jeanne, Vittorio and his sons. Things almost go wrong when Evans' wife turns up, but Vittorio leads her to believe that her husband's same numbered flight is on the following day.

Having failed to contact, Mrs Evans goes to the police. At police HQ, she identifies Sartet as one of the men she saw on the plane. Meanwhile, the plane is making its descent towards New York when the gang hijacks the aircraft.

Warned of Sartet's imminent arrival in the United States, the local police race to the airport while the plane lands on a highway which has been closed off by gang's local members. Other Mafia men waiting in cars unload the diamonds from the plane and split up, Jack for Canada and the Manalese for Paris. Intending to move to Veracruz, Sartet hides out in New York while awaiting his share of the proceeds.

Back home, late one evening, the Manalese are watching a film which includes a scene of a couple making out. Roberto exclaims that it looks just what Sartet has done with Jeanne. Jeanne denies the affair but the others tend to believe it. They lure Sartet back to Paris with the promise to give him his share. Jeanne calls Sartet's sister Monique to warn him of the trap. Monique await him at the airport but learns that he boarded an earlier flight.

Sartet contacts Vittorio for his share in the jewelry loot meets him, accompanied by Jeanne, on a quiet road outside town. Vittorio shoots both him and Jeanne dead. Leaving both bodies, along with Sartet's money for the police to take care of, Vittorio returns home but is arrested there by Le Goff.