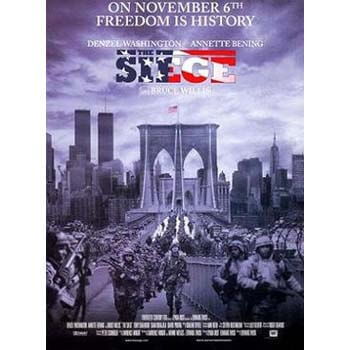 The Siege is a 1998 American action thriller film directed by Edward Zwick. The film is about a fictional situation in which terrorist cells have made several attacks in New York City. The film stars Denzel Washington, Annette Bening, Tony Shalhoub, and Bruce Willis.

FBI Special Agent Anthony Hubbard (Denzel Washington) and his Lebanese American partner, Frank Haddad (Tony Shalhoub), intervene at the hijacking of a bus fully loaded with passengers, which contains an explosive device. The bomb turns out to be a paint bomb and the terrorists escape. The FBI receives demands to release Sheikh Ahmed (Ahmed Ben Larby) bin Talal, a radical Iraqi cleric who was suspected to have ordered the earlier bombing at the American embassy in Dhahran, Saudi Arabia who was captured and extracted while going to Lebanon by a group of American clandestine operators of Lebanese-American ancestry in the introductory scene of the film, who was then imprisoned in an undisclosed location after being extracted while the U.S. Government prepared to prosecute him for his role in the barracks bombing. Hubbard eventually comes into conflict with Central Intelligence Agency agent Elise Kraft (Annette Bening), as he takes a terrorist suspect into custody and arrests Kraft. Later, another terrorist threat is made and a Metropolitan Transportation Authority bus is bombed. The feds captures a man named Samir Nazhde (Sami Bouajila), who admits to signing the visa application of one of the suicide bombers in the course of signing many applications for student visas in his job as a lecturer. However, Kraft insists that Samir is not a terrorist and that his continued freedom is vital to the investigation.

The terrorist incidents escalate, including the bombing of a bus and a crowded theater, a hostage-taking at an elementary school, and the destruction of One Federal Plaza, the location of the FBI's New York City field office, with over 600 casualties. In spite of objections, the President of the United States declares martial law and the United States Army's 101st Airborne Division, under the command of Major General William Devereaux (Bruce Willis), occupies and seals off Brooklyn in an effort to find the remaining terrorist cells. Subsequently, all young men of Arab descent, including Haddad's son Frank Jr., are rounded up and detained in Downing Stadium. Haddad resigns in outrage. New Yorkers stage violent demonstrations against the Army and the profiling of the Arabs; the Army fights to maintain control. There are reports of Army killings.

Hubbard and Kraft, now revealed to be an agent named Sharon Bridger, continue their investigation and capture a suspect, Tariq Husseini (Amro Salama). Devereaux's men torture and kill Husseini in the course of the interrogation. Afterward, Bridger tells Hubbard that Husseini revealed nothing of value because of the principle of compartmentalized information. Sickened, Bridger finally admits that she provided training and support to militants opposed to Saddam Hussein's regime, working with Samir to recruit and train the followers of the Sheikh. After the U.S. cut their funding and left them exposed, she took pity on the few of them who had not yet been slaughtered by Hussein's forces, and arranged for them to escape to the United States, ultimately leading to the present situation as they turn their bomb making and covert skills on the country that now holds their leader. Sharon and Hubbard compel Samir to arrange a meeting with the final terrorist cell. Hubbard also convinces Haddad to return to the FBI.

A multi-ethnic peace march demonstrates against the occupation of Brooklyn. As the march is getting under way Hubbard and Haddad arrive at the meeting place, but Bridger and Samir have already left. Samir reveals to Bridger that he constitutes the final cell while in another sense he says, "there will never be a last cell." He straps a bomb to his body which he intends to detonate among the marchers. Hubbard and Haddad arrive in time to prevent him leaving but Samir shoots Bridger in the abdomen as she struggles to stop him. Hubbard and Haddad kill Samir but despite their best efforts the pair can only watch as Bridger succumbs to her wound after managing to recite certain lines of the second half of the Lord's Prayer and concluding with "Inshallah" – the Arabic phrase "God Willing".

Hubbard, Haddad, and their team raid Devereaux's headquarters to make an arrest for the torture and murder of Husseini. Deveraux insists that under the War Powers Resolution the authority vested in himself by the President supersedes that of the court which issued the arrest warrant. Deveraux then commands his soldiers to aim their assault rifles at the agents, resulting in a Mexican standoff. Hubbard reminds Devereaux that the civil liberties and human rights which he took from Husseini are what all of his predecessors have fought and perished for. Devereaux finally submits and then gets arrested. Martial law ends and the detainees, including Haddad's son, are given their freedom.