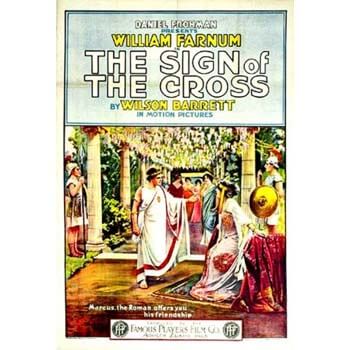 The Sign of the Cross is a 1914 American drama silent film directed by Frederick A. Thomson based on the 1895 play by Wilson Barrett. The film stars William Farnum, Rosina Henley, Sheridan Block, Morgan Thorpe, Ethel Grey Terry, Lila Barclay and George Majeroni. The film was released on December 21, 1914, by Paramount Pictures.

Rome, 64 A.D. When the emperor Nero renews the persecutions against Christians, the prefect Marco Superbo fears for the life of Mercia, a Christian with whom he is in love. The woman, however, is arrested and the emperor refuses to pardon her unless she renounces her faith. Mercia not only rejects the offer that is communicated to her by Marco but, before entering the arena, also converts Marco who, together with her, faces death.