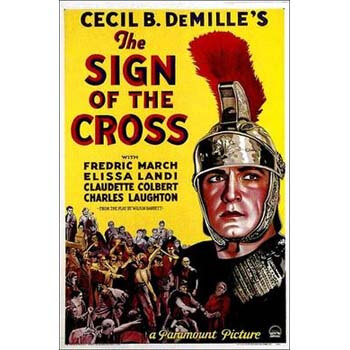 The Sign of the Cross is a 1932 American pre-Code epic film produced and directed by Cecil B. DeMille and released by Paramount Pictures. Based on the original 1895 play by English playwright Wilson Barrett, the screenplay was written by Waldemar Young and Sidney Buchman. It stars Fredric March, Elissa Landi, Claudette Colbert, and Charles Laughton, with Ian Keith and Arthur Hohl.

Both play and film have a strong resemblance to the 1895-96 novel Quo Vadis and, like the novel, take place in ancient Rome during the reign of Nero. The art direction and costume design were by Mitchell Leisen, who also acted as assistant director. Karl Struss was nominated for an Academy Award for Best Cinematography. It is the third and last in DeMille's biblical trilogy, following The Ten Commandments (1923) and The King of Kings (1927).