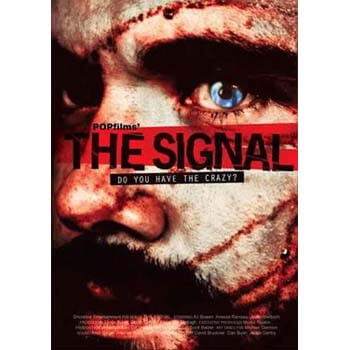 The Signal is a 2007 American horror film written and directed by independent filmmakers David Bruckner, Dan Bush and Jacob Gentry. It is told in three parts, in which all telecommunication and audiovisual devices transmit only a mysterious signal turning people mad and activating murderous behaviour in many of those affected.

The film's three interconnected chapters ("transmissions") are presented in a nonlinear narrative. Each of them manifests elements of (besides the overall genre of psychological horror), respectively, splatter film, black comedy, and a post-apocalyptic love story. The Signal was met with a mixed but largely positive critical reception.

The film opens, showing that Mya is cheating on her husband Lewis with a man named Ben. Ben attempts to convince Mya to leave the city with him, but she remains noncommittal. As Mya exits, Ben turns the television on and watches a bizarre, psychedelic sequence of images. Mya begins to listen to a compact disc given to her by Ben, but she is menaced by men who are acting strangely in a parking garage. When she reaches her apartment building, she finds more people behaving strangely. Unknown to Mya, the Signal, a static-like interference that is coming through the television, radio and telephone amplifies each person's negative emotional traits, causing them to act irrationally and, in most cases, violently.

Once inside her apartment, Lewis and two friends, Jerry and Rod attempt to fix the TV, but Lewis, the first to react to the Signal, beats Jerry to death with a baseball bat over a minor argument. Mya flees in panic, leaving Rod and Lewis in a struggle, but finds the whole building in chaos with people killing each other. Mya hides out in the nearby apartment until morning. When she decides to leave and re-enter her home, she finds an unconscious Lewis, bound to a chair with duct-tape. He awakens only to see her leave him behind and exit into the hall listening to Ben's compact disc, but encounters Rod who drags her into a janitor's closet. He then tells her of the night he spent trying to survive in the apartment complex. It becomes evident that the Signal affects each person differently, and that there is the possibility that Rod is also crazy, though he seems to largely have control of his own judgment. Together, they escape, and attempt to drive to safety. But after being shot by a policewoman and almost left behind by Mya, Rod becomes even more violent and attacks Mya, who crashes the car. Rod is incapacitated and trapped in the vehicle, while Mya flees, telling a stranger named Clark that she is going to the train station.

The story turns to Ben, who finds the duct-taped Lewis and loosens his bonds. Lewis knocks Ben unconscious and puts him in the back of a pest control van. At a nearby apartment, a woman named Anna is setting up for a New Year party. The Signal has affected her so that her dutifulness as a homemaker is amplified (though she is also quite possibly made psychologically unstable from being forced to kill her own husband), and despite having killed her crazed husband in self-defense, she has continued planning for the party as if nothing has happened. Clark, who is her neighbor, and a conspiracy theorist, soon arrives. The two begin attempting to figure out what is happening, and Clark also admits that he has decapitated Rod with a shovel, when Rod attacked him after being freed from the car wreck. Eventually Lewis makes his way to the apartment, under the mistaken belief that Mya has been there, because her car is crashed outside. At first, Lewis befriends Anna and Clark, and they convince themselves that none of them have been affected by the Signal, and that they have to band together in order to survive. Lewis, whose violent and paranoid tendencies are clearly amplified by the Signal, kills Anna's niece, Laura, who arrives at the door seeking help, under the mistaken belief that she is attacking Anna with a knife. He dismisses the act as defense on the part of Anna, but Clark convinces him not to attack the next arrival, Jim, who is apparently oblivious of the situation. While Anna hallucinates that Clark is her husband, Lewis hallucinates that Jim is Ben, taunting him. He beats Jim to death, restrains Clark in a chair by staking his arms to the chair with kitchen knives, then attacks Anna, spraying her with insecticide until she is blind. Once he realizes she knows nothing about Mya's whereabouts, Lewis forces her to ingest the poison, apparently killing her. He then exposes Clark to the Signal in order to convince him to tell him where Mya had gone. Ben, having woken up and freed himself from Lewis's van, enters the apartment and attacks Lewis with the pesticide canister, knocking him out.

Lewis wakes up and follows Ben and Clark. He attempts to kill them in a tool shed, but they fight him off and escape. After Ben convinces Clark that the Signal is a lie, thus breaking its effect on him, Clark informs Ben where Mya was headed. Ben and Clark make a run through the now mostly-dead city and arrive at the train station. There, they find Mya tied to a chair, being forced to watch the Signal by Lewis, who attacks them and strangles Clark until he is unconscious. Ben then resorts to using Lewis's own paranoia against him, eventually tricking Lewis into believing that their roles are reversed, and that Lewis is the one man he hates most: Mya's lover. Lewis punches a signal-broadcasting TV, in a frustrated rage, electrocuting himself.

The story ends ambiguously. A series of scenes showing Ben and Mya with Clark, stocking up on supplies, then Ben and Mya going separate ways from Clark, suggesting they have succeeded. However, the next scene reveals Mya still tied to the chair, seemingly catatonic due to her prolonged exposure to the Signal. Ben places Mya's headphones on her, and she closes her eyes, a tear rolling down her cheek, before the credits appear. Whether this is the final reality, or a flashback before Ben and Mya's escape from the city, is left for the viewer to decide.