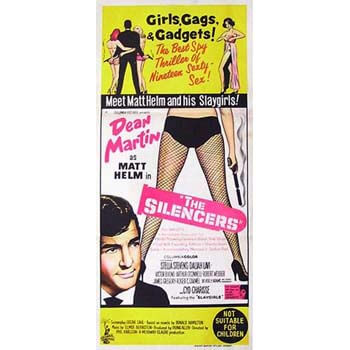 The Silencers is an American Pathécolor spy film spoof motion picture released in 1966 and starring Dean Martin as agent Matt Helm. It is loosely based upon the 1962 novel The Silencers by Donald Hamilton, as well as another of Hamilton's Helm novels, Death of a Citizen (1960).

It is notable as being the first film to have a post-credits scene.

Once a photographer by day, spy by night, Matt Helm is now a happily retired secret agent, shooting photos of glamorous models instead of guns and enjoying a close relationship with his assistant, the lovely Lovey Kravezit. But then his old boss, Macdonald, coaxes him back to the agency ICE to thwart a new threat from the villainous organization Big O.

The sinister Tung-Tze is masterminding a diabolical scheme to drop a missile on an underground atomic bomb test in New Mexico and possibly instigate a nuclear war in the process. Helm's assignment is to stop him, armed with a wide assortment of useful spy gadgets, plus the assistance of the capable femme fatale, Tina, and the seemingly incapable Gail Hendricks, a beautiful but bumbling possible enemy agent.

Along the way, Helm is nearly sidetracked by a mysterious knife-wielding seductress and he witnesses the murder of a beautiful Big O operative, the sultry striptease artist Sarita.

In the end, Helm prevails, with Gail by his side as he all but singlehandedly destroys Tung-Tze's evil enterprise and plot to rule the world.