The Squid and the Whale 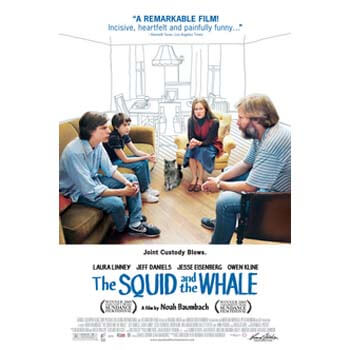 The Squid and the Whale is a 2005 American independent arthouse comedy-drama film written and directed by Noah Baumbach and produced by Wes Anderson. It tells the semi-autobiographical story of two boys in Brooklyn dealing with their parents' divorce in 1986. The film is named after the giant squid and sperm whale diorama housed at the American Museum of Natural History, which is seen in the film. The film was shot on Super 16mm, mostly using a handheld camera.

Bernard Berkman is an arrogant, once-promising novelist whose career has gone into a slow decline as he spends more time teaching and less time writing. His unfaithful wife, Joan, has recently begun publishing her own work to widespread acclaim, which only increases the growing tension between them. One day, Bernard and Joan tell their two sons, 16-year-old Walt and 12-year-old Frank, that they are separating, with Bernard renting a house on the other side of Prospect Park from their home in Park Slope, Brooklyn.

As the parents set up a schedule for spending time with their children, Walt and Frank can hardly imagine that things could get more combative between their parents. They do, however, as Joan begins dating Ivan, Frank's tennis instructor, and Bernard starts sharing his new house with Lili, one of his students. Meanwhile, the two boys begin taking sides in the battle between their parents, with Frank siding with his mother and Walt lashing out at her.

Along with the trouble both boys exhibit verbally with their parents, they also show internal struggles and very different ways of handling the stress of their parents' divorce. Walt's most obvious cry for help is when he performs and claims to have written "Hey You" by Pink Floyd at his school's talent show. After Walt wins first place and receives praise from his family and friends, his school realizes that he did not write the song. At this point, the school calls Bernard and Joan in to discuss Walt. They all decide that Walt should see the school psychologist. Meanwhile, Frank exhibits his own internal turmoil by repeatedly masturbating at school. He also begins to drink beer and speak in a way that emulates Ivan's mannerisms.

During the meeting with the psychologist, Walt finally starts to see things more objectively, without the taint of his father's opinions. He realizes that he had been emulating Bernard's rude and arrogant behavior when he mistreats a girl he had been dating named Sophie, who breaks things off with him when she finally gets fed up with his narcissism and cruel treatment of her. The psychologist asks Walt about his memories and it becomes clear to Walt that his father was never really present, and that his mother was the one whom he remembers caring for him. His fondest memory is when his mother would take him to see the giant squid and whale exhibit at the American Museum of Natural History; the exhibit scared him as a small boy so he would look at it through his fingers whenever they went by the exhibit at the museum.

After a heated argument between Bernard and Joan over custody, Bernard collapses on the street outside their home and is taken to the hospital. Bernard asks for Walt to stay by his side, but Walt now seeing his father for the vindictive and narcissistic jerk he really is instead runs to visit the squid and whale. The film ends with him standing in front of the exhibit, finally able to stare straight at it.