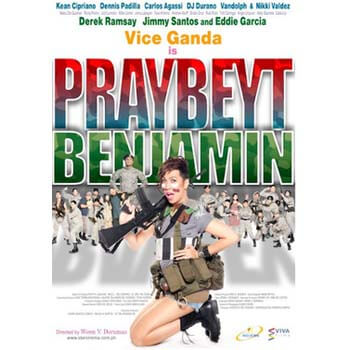 It starts in the Philippines as Lapu-Lapu fights Ferdinand Magellan and wins the fierce battle defeating Magellan in 1521. Later in 1898, as the Katipunans are salvaged their graceful solitary friends and fight those bad guys. In the Japanese War in 1942, the battle cry settled in as the other Japanese went to attack the terrorists.

In the present day, Benjamin "Benjie" Santos VIII (Vice Ganda) comes from a long line of warriors and soldiers. His grandfather, Benjamin Santos VI (Eddie Garcia), expects him to be in the army and to be like his ancestors who fought every battle in the country. He lives with his parents and two sisters named Jesamine (Angelie Urquico) and Anjamin (Abby Bautista).

His father, Benjamin Santos VII (Jimmy Santos), gives being a military soldier to be what he wants to be, a scientist and an inventor. Benjie's grandfather does not agree with his decision and Benjie and his immediate family were forced to leave his grandfather's house. They now live in a cramped house, where they started a new life. His father, as expected, followed what makes him happy. He invented gadgets and unique deadly weapons. Some examples are the Utot-gun (lit. 'Fart gun'), a fan that shoots bullets, and a tiara that can potentially kill thousands of people.

A few years later they were invited to his grandfather's 75th birthday by relatives. His grandfather finds out Benjie is gay. They were asked to leave and to never show themselves again and declares them a disgrace to the Santos family.

A terrorist organization, Bandidos International starts a civil war in the Philippines and kidnaps Benjie's grandfather and other high-ranking officials. A leader of the group named Abe Sayyep claims they have taken over the whole country. The Philippine government introduced conscription as part of their fight against the terrorist forcing Benjie to enlist in place of his ailing father. In the camp, Benjie meets other members of his platoon. He was later introduced to his group's commander Brandon Estolas (Derek Ramsay) and became secretly infatuated with him. Benjie's group initially performs poorly in training and was in danger of being dissolved. His group decides to train at night, and show their improvement in the morning. A rival group, incensed with constantly losing to Benjie's group during training, sought to reveal Benjie's sexuality by getting Benjie drunk and filming him dancing lewdly and effeminately.

The following morning, the High-General calls Benjie because of the video, and makes him leave the army. When Benjamin was about to leave, his friends joined him to show solidarity. They left the army, and while travelling a wooded area stumbled upon the location of the Bandidos International's base by accident. They went back to camp to inform the High General but the official won't believe the group. The whole camp believed the real enemy base was in Tanay, based on the army's gathered information and decided to attack there instead where they were later ambushed by hundreds of terrorists.

Meanwhile, Benjie's group returns to the enemy's real base, where they saw the terrorist's trucks with the captured forces, including Benjie's grandfather and Brandon—the group's former commander in the army. They plan to break in the enemy camp by dressing up as women to trick the guards into letting them inside their base. Once inside, the group kills many terrorists using the inventions of Benjie's father. Benjie manages to find his grandfather, Brandon, and the other generals. Benjie's grandfather thanks him and asks for forgiveness for treating him so badly. Benjie is then reunited with his group, where Abe Sayyep appears and attempts to shoot Benjie's grandfather. Benjie takes the bullet to save his grandfather resulting to his death.

Both him and Abe Sayyep is dead. In the afterlife, Benjie meets his ancestors who tells him that they are proud of him and tells him that it was not yet time for him to die. He is soon revived, and the group returns home, where they celebrate their victory with a party. Benjie tells his feelings for Brandon but Brandon rejected him saying he already has a fiancé, a woman who looks exactly like him.