The Unkindness of Ravens 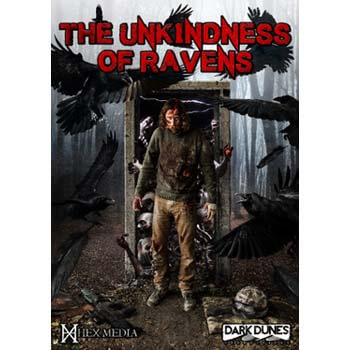 The Unkindness of Ravens is a 2016 British horror film directed by Lawrie Brewster and starring Jamie Scott Gordon as a veteran that comes face to face with demonic ravens. The film had its world premiere on 27 August 2016 at the London FrightFest Film Festival. Prior to its release the horror website Bloody Disgusting marked The Unkindness of Ravens as one of their "10 Must-See Independent Horror Films of 2016".

In November 2015 Brewster released a promotional video showing people dressed in raven costumes from the film pranking walkers and sightseers in Scotland.

Andrew (Jamie Scott Gordon) is a homeless war veteran that has been experiencing terrifying flashbacks of his time in the Army, flashbacks that contain visions of imposing raven-like creatures. These flashbacks are so intimidating that Andrew has developed a phobia of ravens and as a result he travels to a retreat in the Scottish Highlands to come to terms with his past and his fears. However he soon discovers that this is easier said than done, as this move will bring him face to face with a supernatural force known only as the Raven Warriors.