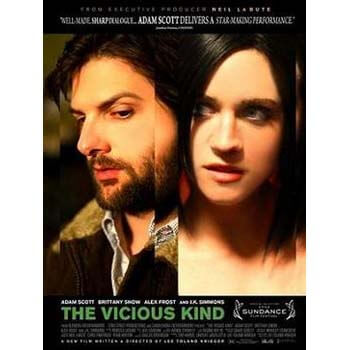 The Vicious Kind is a 2009 drama film directed and written by Lee Toland Krieger. The screenplay was originally set in a small town in Rhode Island, but the film was shot in Norfolk, Connecticut, which also became the character's hometown. The film stars Adam Scott, Brittany Snow, Alex Frost, and J.K. Simmons. The film premiered at the 2009 Sundance Film Festival, and opened in Los Angeles on December 11, 2009, at the Laemmle Sunset 5.

Peter is an idealistic college student on Thanksgiving break and his older brother Caleb is begrudgingly giving him a ride home. At school, Peter has found a new girlfriend, Emma Gainsborough, and Caleb immediately grills him for details. Emma and Peter met while Emma was on visiting fraternity boys; while Peter says she's a good girl and nothing happened, Caleb immediately perceives her as a whore. On the way to get Emma, Caleb reveals that he hasn't slept in a week.

Caleb is immediately antagonistic to Emma. Caleb drops them off at his father Donald's house, revealing to Emma that he and Donald do not get along and this will be the last time he will see them this weekend. Donald comes off as well-meaning, if somewhat flirtatious.

Caleb tries to sleep but keeps seeing images of his ex-girlfriend, Hannah, who behaves and looks strikingly similar to Emma. Hannah has continuously called Caleb, so he drops off pictures of himself having sex with a prostitute at her doorstep, ringing the bell and fleeing.

Caleb runs into Emma twice over the next two days, once at the bowling alley and again at the grocery store. He ends up physically and verbally attacking her, and threatens her not to hurt Peter, who is a good kid (and a virgin). Moments later, he breaks down, begging for her forgiveness.

That night, Emma sees Caleb trying to sneak around the yard with a camera. Emma wants an explanation about what happened earlier. Caleb goes into his belief on what he heard about her at school, his girlfriend Hannah who cheated on him, and his lack of sleep, which has further muddled his actions and behavior. Caleb eventually leaves, feeling better after these confessions.

The next morning, Emma asks Donald about Peter's mother, and he reveals that she died when Caleb and Peter were young. Donald also says that his wife cheated on him prior to being diagnosed with cancer and that no one visited her in her final months. At work, Caleb reveals he managed to fall asleep for a few minutes the night before.

Caleb, Peter and Emma go to a restaurant together. During a moment alone, Caleb assures Emma that he doesn't have feelings for her before forcibly kissing her. Emma says nothing about it to Peter. Caleb privately warns Peter to watch Emma carefully, because she's been eyeing him. Peter says he's in love with her and wants to give her his virginity, and Caleb laughs at the idea. Caleb apologizes for his ideas that she was a whore.

While Peter and Emma prepare to have intercourse, Peter reveals that what Donald told her is true, except that Caleb was the only one to see their mother before she died, and Caleb and Donald haven't spoken since. Caleb visits his prostitute, and asks her if it's normal to be in love with a perceived image of someone, even if that's not who they really are (likening Emma to Hannah). He then asks if she was abused as a child, which offends her. Caleb loses his temper, then comes back and gives her a better tip, implying that his perception and treatment of women is evolving.

At a bar, Caleb's co-worker JT asks him if he's had sex with Emma yet, and he says no, but he wants to. He spots some men sexually harassing a woman and ends up fighting them, marking another change in him.

Peter tries to have sex with Emma but ejaculates prematurely. Caleb drives over to see Emma, and this time, she doesn't rebuke him when he kisses her, and eventually, they end up having passionate sex in Caleb's old room.

Emma asks why Caleb was the only one to see his mother before she died. He reveals he was hurt by her cheating, and shut her out of his life. However, he eventually discovered that Donald had been the one cheating until his wife finally left, never thinking that he would refuse to let her see her sons. Caleb never told Peter because he was only 12. Emma tells Caleb she was a virgin. Caleb leaves and reminds Emma that Peter is in love with her. On his way out, he runs into his father who deduces what happened and says he'll tell Peter. Caleb calls him a coward for erasing him out of his life. They both hide as Peter goes to Emma's room, and Caleb dictates to Donald that he won't tell Peter what he did, otherwise he'll tell him Donald's secrets and he'll lose both his sons. Peter and Emma sleep together, and he loses his virginity to her.

The next morning, Donald drives them to the train station. On the way, Peter tells Emma he loves her, but it causes Emma to cry. Donald confesses to Peter that he's made mistakes, and that sometimes, people know what they are doing is wrong but they do it anyway, because the right thing is painful. The two of them alone again, Caleb rings Donald's doorbell and Donald invites him in, their relationship beginning to mend at last.