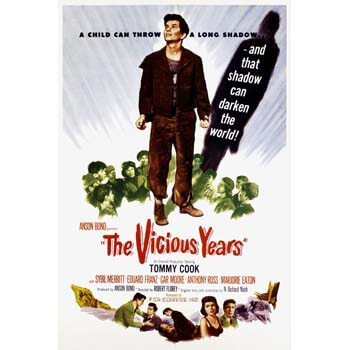 The Vicious Years is a 1950 American film directed by Robert Florey. The screenplay concerns an orphan named Mario who witnesses Luca Rossi committing a murder, and blackmails Luca into taking him home as a member of his family.

Mario, an Italian war orphan, sees Luca Rossi commit a murder. Eager for a home and family life, Mario promises not to tell the police if Luca takes him into his household and family. Luca fears and hates Mario, but his father, mother and sister all come to love him. Afraid the Mario will reveal his secret, Luca attempts to kill him. Aware now, just as he has suspected, Emilio Rossi realizes that his son is no good and turns him over to the police. Mario is persuaded to stay with the family as an adopted son.