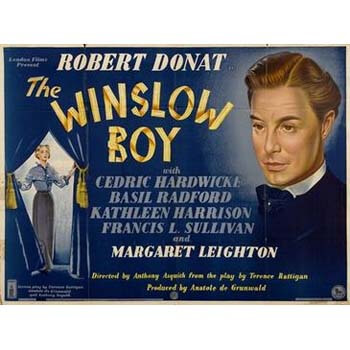 The Winslow Boy is a 1948 British film adaptation of Terence Rattigan's 1946 play The Winslow Boy. It was made by De Grunwald Productions and distributed by the British Lion Film Corporation. It was directed by Anthony Asquith and produced by Anatole de Grunwald with Teddy Baird as associate producer. The adapted screenplay was written by de Grunwald and Rattigan based on Rattigan's play. The music score was by William Alwyn and the cinematography by Freddie Young.

Set against the strict codes of conduct and manners of the age, The Winslow Boy is based on a father's fight to clear his son's name. The boy (Ronnie) is expelled from Osborne Naval College for supposedly stealing a five-shilling postal order, without receiving a fair trial. His father (Arthur) and sister (Catherine) lead a long running legal battle, that takes them as far as the House of Commons. The play focuses on a refusal to back down in the face of injustice – the entire Winslow family, and the barrister who represents them (Sir Robert Morton), make great sacrifices in order that right be done.

The play was inspired by an actual event, which set a legal precedent; the case of George Archer-Shee, a cadet at Osborne in 1908, who was accused of stealing a postal order from a fellow cadet. His elder brother, Major Martin Archer-Shee, was convinced of his innocence, and persuaded his father (also called Martin) to engage lawyers. The most respected barrister of the day, Sir Edward Carson, was also persuaded of his innocence, and insisted on the case coming to court. On the fourth day of the trial, the Solicitor General accepted that Archer-Shee was innocent, and ultimately the family was paid compensation. George Archer-Shee died in the First World War and his name is inscribed on the war memorial in the village of Woodchester in Gloucestershire, where his parents lived. There is no real-world counterpart to the character of Catherine, although she is central to the plot of the play and films.

Arthur Winslow goes home from his job at the bank after 46 years, retiring because of arthritis. He has a normal domestic life for a middle-class family: his eldest son is at Oxford University is daughter is a non-militant suffragette, and his youngest son is starting as a naval cadet. The next door neighbour, John, asks for his daughter's hand in marriage.

Ronnie Winslow (Neil North), a cadet at the Royal Naval College, appears unexpectedly back home, soaking wet. He has a letter for his father from the college which he is too scared to give him. He is accused of the theft of a postal order for five shillings (£0.25). An internal enquiry which grants him no chance of defence, finds him guilty and his father, Arthur Winslow (Sir Cedric Hardwicke), is requested to remove his son from the college. Unwilling to accept the verdict, Winslow and his daughter Catherine institute their own enquiries and engage a friend and family solicitor, Desmond Curry (Basil Radford) to assist them, including the briefing of the best barrister in England at the time, Sir Robert Morton (Robert Donat), should the case come to court. The father takes the matter to his MP, who raises it at the House of Commons under the issue within the Magna Carta that no subject of the country may be condemned without trial.

He hires Sir Robert Morton to take the case.

When the solicitor's bill reaches £634, well beyond his overdraft limit, the father is advised to cut his losses and abandon the case. He tells the eldest son that he is taking him out of Oxford to cut his expenses and will find him a job at the bank instead.

After aggressively interrogating Ronnie over discrepancies in his recollection and his habit of copying his friend's signature (which purportedly could have been used to steal the postal order), Sir Robert is convinced Ronnie is innocent and agrees to take the case.

The government is unwilling to allow the case to proceed but yields after heated debates in the House of Commons, and the case does come to court. Morton is able to discredit much of the supposed evidence, and the government finally withdraws the charges against Ronnie. Although the family wins the case, each of them has lost something along the way: Dickie Winslow (Jack Watling) has been forced to leave Oxford out of lack of money, Catherine (Margaret Leighton) loses her marriage settlement and subsequently her fiancé, John Weatherstone (Frank Lawton), and Arthur Winslow loses his health.