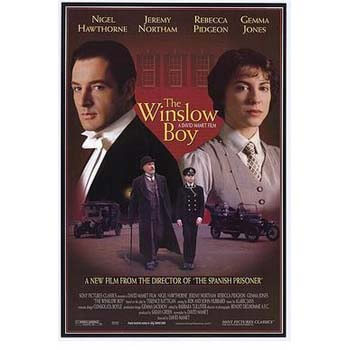 The Winslow Boy is a 1999 period drama film directed by David Mamet and starring Nigel Hawthorne, Rebecca Pidgeon, Jeremy Northam and Gemma Jones. Set in London before World War I, it depicts a family defending the honour of its young son at all cost. The screenplay was adapted by Mamet based on Terence Rattigan's 1946 dramatic play The Winslow Boy.

It was screened in the Un Certain Regard section at the 1999 Cannes Film Festival.

It is Christmas 1911 and Arthur Winslow, a London banker, is making final preparations for a dinner to seal the engagement between his daughter Catherine, an outspoken supporter of the cause of women's suffrage, and Captain John Watherstone. The family and guests are toasting the upcoming marriage when Arthur discovers that his youngest son Ronnie, a 13-year-old cadet at the Royal Naval College, Osborne, is unexpectedly home. Ronnie has been accused of the theft of a postal order. An internal enquiry, conducted without notice to his family and without benefit of representation, finds him guilty and Mr. Winslow is "requested to withdraw" his son from the college (the formula of the day for expulsion). Ronnie proclaims his innocence and his father believes him—enough so that he demands an apology from the College. When the college refuses to reinstate Ronnie, Arthur decides to take the matter to court. With the help of his daughter and Desmond Curry, a solicitor and friend of the family, Mr. Winslow decides to hire the most highly sought after barrister in England at the time, Sir Robert Morton, known also to be a shrewd opposition Member of Parliament.

The government is unwilling to allow the case to proceed. The Naval College is a representative of the Admiralty and the Crown, and as such British law presumes they are infallible and above question; their judgment can be legally questioned only with the permission of the Attorney General. However, after heated debates in the House of Commons, the government yields, and the case does come to court.

Catherine had expected Sir Robert to decline the case, or at best to treat it as a political tool; instead, he is coolly matter-of-fact about having been persuaded of Ronnie's innocence by his responses to questioning (in fact, a form of cross-examination, to see how young Ronnie would hold up in court) in the presence of his family. Catherine is not enthusiastic about Morton, whom she considers cold and heartless. Catherine is also disturbed by Sir Robert's establishment views: he is a conservative opponent of women’s suffrage. "He always speaks out against what is right," she observes to her father, though she admires his legal skills. Morton, for his part, obviously is quite taken with Catherine from the moment he meets her in his offices; later he stares at her as she arrives at the House of Commons and as she watches the proceedings from the ladies' gallery.

In the meantime, the case creates media hysteria and puts a heavy toll on the Winslow family – their funds are rapidly depleted in order to cover legal expenses. Mr. Winslow's physical health deteriorates under the strain and the happiness of the Winslows' home is destroyed. Arthur's wife, Grace, begins to wonder if the real issue is justice or a father's stubborn and foolish pride. Forced to make economical sacrifices, Grace Winslow is unwilling to take the drastic measure of dismissing Violet, who has been the family’s maid for over twenty years. The eldest son, Dickie Winslow, has to leave Oxford due to the lack of money destroying his chance at a career in the Civil Service. Instead, he is compelled to find employment in his father’s bank. Catherine's marriage settlement is also gone. Her fiancé John Watherstone breaks off the engagement in the face of opposition from his father (an Army Colonel), forcing her to consider a sincere and well-intentioned offer of marriage from Desmond, whom she does not love. Sir Robert has also declined appointment as Lord Chief Justice, rather than drop the case. The least affected is Ronnie, who happily has been transferred to a new school.

At trial, Sir Robert, working together with Desmond Curry and his firm, is able to discredit much of the supposed evidence. The Admiralty, certainly embarrassed and presumably no longer confident of Ronnie's guilt, abruptly withdraws all charges against him, proclaiming the boy entirely innocent.

When their resounding victory arrives, not a single member of the Winslow family is present at court. It is Violet, the maid, who tells Mr. Winslow and Catherine what has happened at court. Shortly after, Sir Robert appears in the Winslows’ home to share the good news. The film ends with a suggestion that romance might yet blossom between Sir Robert and Catherine, who acknowledges that she had misjudged him all along.