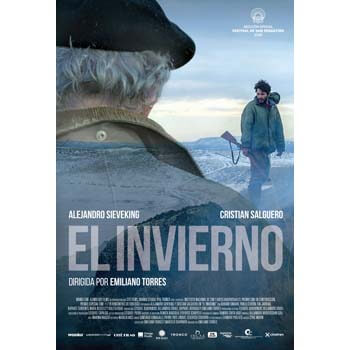 El Invierno (English: The Winter) is the dramatic first film of the Argentine director Emiliano Torres, starring Alejandro Sieveking and Cristian Salguero. The worldwide premiere was on September 22, 2016, at the San Sebastián International Film Festival and had its local premiere in Argentina on October 6 of the same year. It was produced by Wanka Cine (Argentina) and Ajimolido Films (Argentina), in co-production with Cité Films (France), Orange Studio (France), RTA (Argentina) and Tronco (Argentina). It had the support of National Institute of Cinema and Audiovisual Arts.

Evans, the old foreman at an estancia in Patagonia receives a new group of workers who come to participate in the shearing season. Within the group of laborers, Jara, a young man from the northeastern part of Argentina, stands out. The owners of the estancia see him as a possible new foreman. When the season's work comes to an end, Evans' worst fears come true: after a lifetime of dedication to that work and place he is fired from the estancia and replaced by Jara. The change won't be easy for either of them and each one must find their own way to survive the coming winter.